One morning last May I was out on a morning walk in the fields when I saw a sight I had never seen before: a pair of ducks sitting in a tree. The sun was rising behind them, so I couldn't make out any field marks, but it was clear they were ducks, and, I thought, everyone knows, ducks don't perch in trees!

Well, of course, it turns out that several species of duck do perch in trees, in particular the wood duck, which these turned out to be. Wood ducks nest in cavities in trees, sometimes far from water. And after the ducklings hatch (precocial, as all ducks are, meaning they come out of the shell ready to go), they jump from the tree and are lead by their mother overland to water, where they live (unless eaten) until they are able to fly.

I saw that particular pair of ducks several times over last spring, but did not discover if or where they nested.

This morning I set out for a walk, striding up the hill to the field, and startled a pair of wood ducks that were perched in a tree in the neighbour's backyard. I didn't get much of a look, but I caught up with them again in the swamp in the cedar bush. Perhaps they'll nest there this year.

In the scrape there is a low spot that is a small pond for at least a month or two in the spring. The night before last, its banks were the dancing ground for a woodcock, but this morning, as it is many spring mornings, it was a resting and meeting place for mallards. The picture below shows (not terribly distinctly) two mallard drakes leaving the pond as I came up. 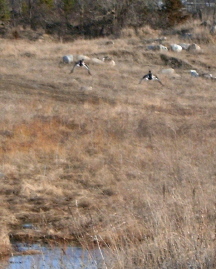 Brothers in Flight
Posted by Pamela Martin at 1:40 PM 7 comments:

Late last summer a skunk started hanging around the yard. A small cute skunk that I saw regularly, usually at dusk or dawn, but occasionally, as in the photo below, taken last August, in broad daylight. 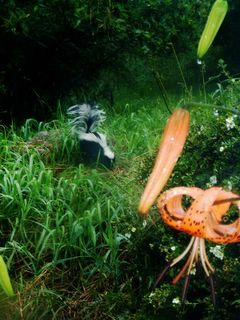 Today, late in the morning, I was walking up at the back, by the shed. I came around the corner, and there was a skunk, a small skunk, a cute skunk. The yard skunk returned? It saw me and skittered under the shed, through the entrance the yard rabbit used all winter. Then for the next few moments, it intermittently stuck its nose out to sniff to see if the danger had passed. But I was still there, so it eventually retreated out of sight. Maybe to wait me out, or maybe it's living there. A little later in the day, I saw my cat come bolting down the hill from the direction of the shed. I let her in the house, and gave her a good sniff, but all was well. I don't think she'd tangle with a skunk.....would she?
Posted by Pamela Martin at 4:45 PM No comments:

This morning I heard my first song sparrow singing of the season. Finally, the early birds are all in place. March 20, first red wing blackbird; March 26, first woodcock "peenting." The robins are singing in the yard too, and have been for several days, but robins overwinter so frequently around here (though I didn't see any this past winter), I am reluctant to count them as real migrants--they may have just flown up from Belleville.

We keep records of the first sightings or hearing of the early birds, and it is remarkable how consistent they are, regardless of weather conditions or whatever else might speed them up or slow them down. The date of arrival varies by less than a week to 10 days over the years.

The first woodcock heard this year was also the first woodcock I've ever seen. Woodcocks are small, funny looking birds that display and "peent" at dusk. They call from the ground, then take off in a whistling, tweeting flight, almost straight up, coming down again not too far from where they started to call again. The one I heard this week came down right past me, so I was able to track him to his landing, and was just able to make him out in the failing light. This bird is also rather cryptically coloured to blend well with the dead grass of the early spring field.

Other travellers reported in the hamlet (by my neighbour Nancy Newman), just passing through, a flock of 15 sandhill cranes flying overhead.

Activity on the walk goes on, but with the snow gone, I only see the barest clues. One print in a patch of mud here, a tuft or two of rabbit fur there, a clump of feathers. But soon the place will be filled with breeding birds. The next spring arrival should be the killdeer, with the bluebird not far behind, and not long after the air will be filled with the songs of the warblers and other late arrivals.

Spring in southern Ontario, sudden, brief, noisy, there's nothing like it.
Posted by Pamela Martin at 7:25 AM No comments: