Part 37? This is the same problem over and over. I still have no eye for the raptors--each identification beyond the few I know in context in which I know them (Northern Harrier flying over a field, Red-tailed Hawk sitting on a post, tree, etc. over a highway in winter, American Kestrel on a wire...) is a struggle.

A neighbour sent me this photo taken in Thomasburg a week ago of what he has tentatively identified as a female Northern Harrier. The white terminal band on the tail in particular makes me think that it is probably a first-year Cooper's Hawk....but I have no confidence in this identification. 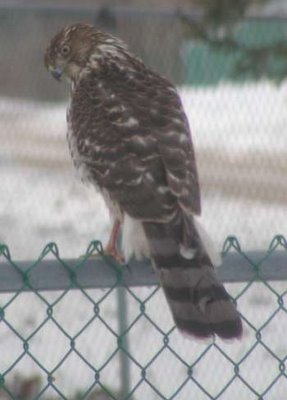 I and the Bird at A Snail's Eye View

I and the Bird #41 is up at A Snail's Eye View. Go for the introduction, a celebration of Australia's first field guide, What Bird is That? published in 1931, illustrated in glorious colour. Then stay for the graciously hosted, diverse collection of the best of recent bird and birder blogging from around the world.

I and the Bird #42 will be hosted by Neurophilsopher's Blog on February 8th.
Posted by Pamela Martin at 6:33 PM No comments:

I didn't post for many days this month (January 2-16) and as a result traffic dropped off some, not just regulars but also searchers stopped coming so often. Then, before the no-post period ended, on January 15, I saw that there had been a small jump up in visitors. On that day I got seven hits from searchers using the terms "float like a hummingbird," bringing them to Floats Like a Hummingbird, a post about hummingbird moths. There have been a few more hits based on the same search since. 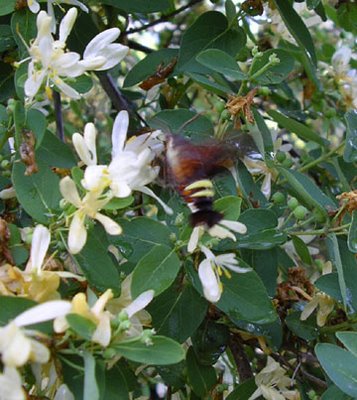 Nessus Sphinx Moth (Amphion floridensis)
Sometimes the first title for a post that comes to me is one that evokes a phrase, book title, movie title, etc., for me, in a way that is not particularly relevant to the post. I use it, perhaps entirely for my own amusement. So when I saw this little surge of hits the first thing I thought was something had happened to Muhammad Ali, because the title evokes, for me, a song popular in the 70's that borrowed Ali's "float like a butterfly, sting like a bee."

So what were these searchers looking for? Had something happened to Ali?

Turns out he had his 65th birthday on the January 17. Happy Birthday, Mr. Ali!

Mystery solved?
Posted by Pamela Martin at 9:44 AM 4 comments:

In Praise of Books 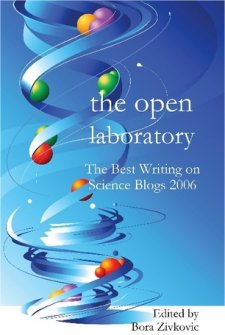 My computer is old, my connection is slow. There has been an explosion of excellent science and nature bloggers. I can't get to them all, I can't get to the ones I already know and love often enough. So I was some pleased to learn that Bora (AKA Coturnix) of A Blog Around the Clock had, with the help of members of the science and nature blogging community, and the availability of POD self-publishing (at Lulu), put together a collection from the best of the science blogs posts, The Open Laboratory, a book, a real, old-fashioned book.

Read all about the journey to produce the work in what must be record time here.

Get your copy here. Mine's already on order.
Posted by Pamela Martin at 11:21 AM No comments:

When Jim and I found the Merlin (Falco columbarius) during our survey of our part of the Presqu'ile Christmas Bird Count he started to talk about birder's luck. How amazing that we intersected with that good bird during those very few moments in all our lives. We were there, the bird was there, we were looking....what fantastic luck. (Turns out that was the only Merlin seen that day--not surprising, this is not a winter bird here.)

I've often thought this kind of thing myself when I've had the chance to see something rarely seen, either because it's a bird or other animal that's very secretive, or occasionally, because it's rare. I think, when it happens in the fields where I walk, "Wow, if I'd left the house a moment earlier or a moment later, this creature and I would not have crossed paths this way."

A couple of times over the last couple of weeks I've disturbed a large bird in the pines in the first field, the beginning of the walk. On windy days I often go through or along side the pine plantation, down to the cedar bush, to get myself used to the weather before crossing the open spaces. The pines are young, thickly branched and quite close together, so while there's often something in there to hear, it's rare to actually see it. Big bird, flushed, but as far as I could tell, really just moved through the branches to another roost. Not noisy, definitely not a Ruffed Grouse. Bigger than a Blue Jay. Could it be an owl? Owls are not rare around here, we have Great-horned, Barred, Screech, and more. But owls are rarely seen by me.

So the other day I went out late in the afternoon--as the days get longer, and dusk gets a little longer I've been able to do that again. It was cold (by our new standards) and windy, and I've had the mystery bird on my mind, so I walked along the edge of the pines. Nothing flushed but some mammal, probably a rabbit, though it bolted with more of a galumph than usual (very fast), probably a large rabbit.

I continued, very quiet day. Cold, and feeling chillier for the lack of snow (a situation that was remedied yesterday). Not much to see but the land itself. Coming back through the scrape, the openest of the open areas, I paused to take in the sweep of the landscape. It was getting dark now, but already dark doesn't fall like a club as it did back in December. And then I saw, flying straight along the pines down to the cedar bush, a large owl--probably a Great-horned Owl (Bubo virginianus), though the look wasn't good enough to know for sure. An owl for sure. Birder's luck.
Posted by Pamela Martin at 8:56 AM 4 comments:

Birds on the Menu

In the better late than never category, I must recommend that if you haven't already done so, do go by and sample from the menu of the best of recent bird and birder blogging, I and the Bird #40, at Peregrine's Bird Blog

And drop in at the online auction in support of the great work done at the Bird Treatment and Learning Centre in Anchorage, Alaska, the doings of which are reported by Dave at the Bird TLC blog.

Then go wide, check out the first edition of a new blog carnival, Oekologie, "a blog carnival devoted to the best ecology and environmental science posts from across the blogosphere!" at The Infinite Sphere (carnival homepage here).
Posted by Pamela Martin at 8:30 AM 1 comment:

Saturday (December 30) was the day for the Belleville Christmas Bird Count (CBC). What a difference from the Presqu'ile count of two weeks before. Dark, cold, and early I set out from Prince Edward County headed for the IGA on Highway 62 north of Belleville to meet my this-time partner Mel. The snow started as I reach Belleville, and was rather heavy by the time I reached the meeting place. But no matter, off we went.

Our area adjoins the area of the Belleville count I've worked before, but lacks the good trails, so we spent most of our time in the car, watching for likely spots, jumping out, jumping back in. Not much to see during the snow (well, there were the Canada Geese and even a few ducks, as well as the usual in built up areas, starlings and house sparrows)--but by lunchtime the weather cleared and it started to warm up.

Our area was partly rural, and partly small town, running along the west side of the Moira River. The bit of snow wasn't enough to bring birds to the feeders, so we didn't see a lot of the usual suspects, though we did find a nice collection of birds at the foot of a small trail leading up into some bush and fields, including a singing house finch. The big story of the day though was the raptors: Red-tailed Hawk 4; hawk species (probably a Cooper's) 1; Kestrel 1. The Kestrel was the best of all. It flew across the road in front of us, carrying a mouse or vole, and settled in a tree. Mel has a scope, and we set it up and had an excellent time watching this beautiful bird enjoying its lunch.

In the end we came up with 20 species. Not bad given the tough conditions in the first part of the day, and the fact that we were driving so much of the time. There are still a few days left in the CBC period (until January 5). Check out the Audubon CBC page. If you're in North America, there may be a count still to be done near you. If there isn't, and especially if you've never counted birds before but would like to start, February is the time of the Great Backyard Bird Count.
Posted by Pamela Martin at 2:00 PM 4 comments:

The Spineless Ring out the Old Year

Circus of the Spineless #16 is up at The force that through... Another great collection of invertebrate posts--the last of 2006. Check it out.

The first of 2007 will be hosted by The Voltage Gate at the end of January.

And speaking of The Voltage Gate, stop by there today for the first Festival of the Trees for 2007.

The next Festival of the Trees will be held at Gingko Dreams, so send your submissions to Kelly at kelly [at] gingkodreams.com. Deadline for submissions is January 29th.

Posted by Pamela Martin at 1:42 PM No comments: