On the Trail of the Fox

At around 6 this morning, just as it was starting to get light, I was sitting on the front porch and saw something small and quick coming down the road. At first I thought it was a cat, then, as its head seemed a very strange shape, I suspected aardvark. But as it got closer I could see that it was a fox carrying a rabbit. When it was nearly in front of the house, at a spot where I couldn't see it, but where it couldn't run away because of the house across the street, I stood up. It must have heard me, because at that point it turned around and headed back up the road, veered off at our driveway, and travelled across the yard and back into the field, what we call the first field. I tracked it later in the morning, but as it was I had a very nice look at it as it went by. 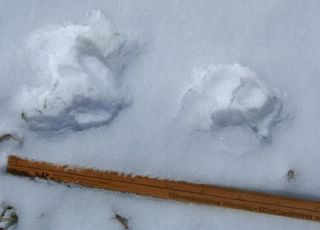 The fox was not large, although its feet are. The mark of a gallop gives an indication of the size--the mark is not quite 40 cm. (16 inches)long in total.

At this point in the winter I am usually suffering from pretty serious track fatigue--I can see the canid tracks all over the place, but am no longer confident saying here a fox, there a coyote, and that's the neighbour's dog. But here was my chance for refreshment.

Fox stride. You can see the drag marks left by the rabbit it was carrying.

I know that these are fox tracks, and nothing else, because I watched them being made! When it was light, and warmer, I followed the tracks across the yard and into the field. 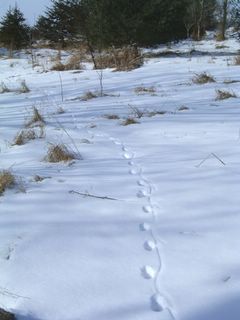 Fox trail through the yard.

I have made claims in this blog before about the dietary habits of foxes. Watch out for that. Amateur naturalists love to generalize from particulars. Particulars, especially particular animals, do not generalize well. Last year I found so many rabbit stomachs left over from fox meals that I decided that foxes, as a rule, leave the stomach. I followed this trail to see if I could see whether this rabbit was to be eaten or cached, and if eaten, would this fox follow the rule. 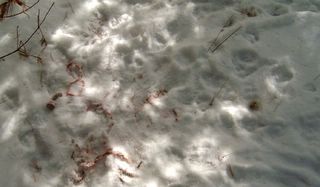 A profusion of tracks, a couple of lengths of intestine, a clump of fur.

No stomach! Oh well, maybe this time I'll learn not to generalize.

I followed on as best I could, lost the trail and picked it up again, in the far field. Had two foxes enjoyed the rabbit together? There was some suggestion that they had, but the tracks were such a mess I couldn't be sure. But they had definitely gotten together later in the far field. Though what they were up to I couldn't say. Mousing? Caching? Loving? Dancing? 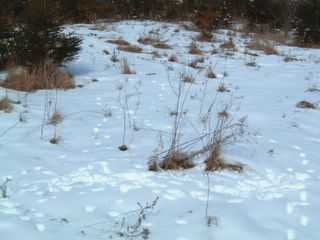 Foxes dance in the moonlight.

I'd come so far already that I headed over to the ATV trail in the far field to head home via the walk. The whole of the far field and the scrape was littered with deer tracks. And there was another set of tracks, one I haven't seen before this year. 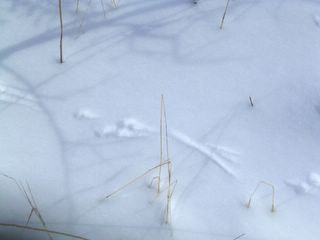 Weasel Tracks.
Posted by Pamela Martin at 5:32 PM No comments:

I haven't posted for so long, not because too little is going on, but because too much is. Too much work, the death of a friend, too many shifts in the weather.

And yet I have managed to get out some days. Coyotes in the field, two in single file, as before, but now they are coming through the yard at night. Two nights in a row this past week. Then there was the night that a dog came through as well, I think. And maybe a pair of foxes? So many canids. And yet there are still rabbit tracks every morning, and although I saw a few tufts of fur in the snow just by the bird feeders a few days ago (no tracks other than rabbit nearby to explain how they got torn out), I saw the yard rabbit again afterwards. So maybe an owl took a rabbit, but at least it didn't that one.

We lost our snow cover and gained it back again, had some very warm weather and some very cold weather, all since February 11! So tracking is pretty fuzzy a lot of the time. But on three warm nights in a row a raccoon came down through the yard and right around the house, leaving lovely clear tracks. I tracked it back to the cedar bush, but lost the trail there.

No more deer sign in the fields, but then two days ago I saw two (it might have been three), on the far side of the far field--past the point where I usually look for tracks. It was a windy day, noisy, so I wasn't sure what I was hearing the first few times I heard what might have been movement in the sumac. Then one of the deer bolted, tail flag waving. But the other one was just out of sight of the first, so didn't immediately follow. It was in clear sight for me. I stood absolutely still and watched it for a while.

It couldn't catch a whiff of me, so we shared my favourite kind of deer encounter. The deer looks, thoughtfully, with one eye and then the other, grazes or walks a bit, and looks again. But it can't interpret what it sees. It is as if it is looking through a tear in the fabric of reality, into another world, where none of the clues to meaning it relies on exist. Sometimes I get bored and move--that a deer understands. This time, the deer that had already bolted on my approach was still nearby, and the hesitant deer eventually wandered over to join it. I started walking again, and they both bounded away.

Friday night (February 18) I was out on the porch at about 10 p.m. and heard a great horned owl hooting, then a second joined it. As I listened, now in amazement, a third began to call. This is the time of year (believe it or not) when these owls are starting to nest, but I have never heard so much owl activity in the hamlet before.

Yesterday I had to leave the hamlet to stay for a few days in Prince Edward County (approx. 50km south). On the drive down, just at Cherry Valley, at about 4:30 p.m., I saw an otter on the ice of a stream, its top half down through a hole in the ice.

It's been one wild winter.
Posted by Pamela Martin at 6:07 PM No comments:

The furthest west point of the walk is the far side of the far field. 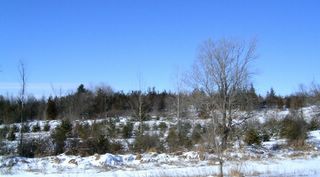 This is a wideshot of the far field from the east. I took this picture while standing on the high tree island the topsoil harvesters left in the scrape. The pine and spruce were planted by the Boy Scouts 10 or 11 years ago. 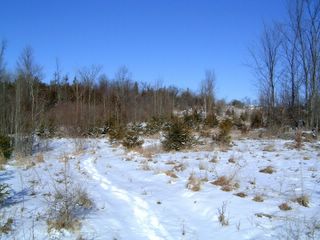 Here's a view of what we call the far field, from the south end, looking north along the ATV track. The prints you see are mine from yesterday.
Posted by Pamela Martin at 11:17 AM No comments:

Last night a pair of coyotes travelled across the scrape, through the first field, the swamp, the cedar bush, and out of the jurisdiction. 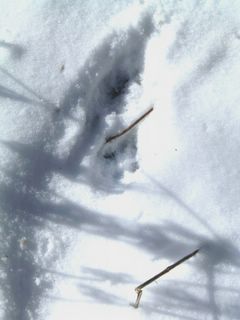 Below is a picture showing the driveway into the scrape from Johnson Road. You can see, just barely, the tracks of one of the coyotes trailing out of the lower right hand corner of the picture. The bigger, showier tracks above them are mine. 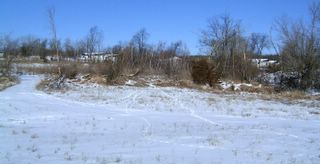 Here you can see the tracks crossing into the water and across to the south end of the cedar bush, beyond the territory of the walk. 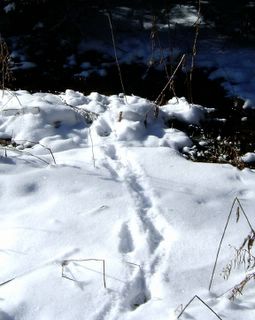 Posted by Pamela Martin at 11:12 AM No comments:

The Cedar Bush and Swamp

The conditions for tracking continue to deteriorate--with no end in sight. There is rain in the forecast for tomorrow, which will take out most of the rest of the snow, and as the weather cools again replace it with ice.

I did see more deer sign, and a little new fox sign in the cedar bush. The juncos are still in the bush and still excitable. And we saw 15 cedar waxwings in the yard this morning. But I thought I'd continue to show features of the walk with some images from the bush and swamp taken today. 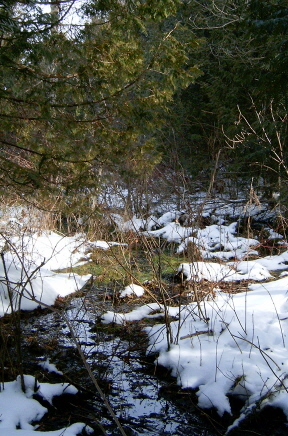 The swamp is fed in part by a spring, and has open water all winter, most winters.

Here is another view that shows, in the background, one of a number of dead trees that attract woodpeckers, including the pileated, and may one day provide a nesting place for a wood duck. 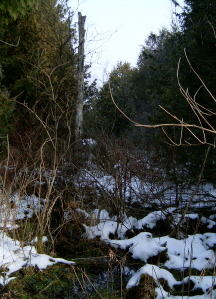 The cedar bush looks quite open in the picture below, but in reality most of it is a bit of a scramble to get through, unlike the wide open spaces of the ATV/snowmobile trail through the fields. 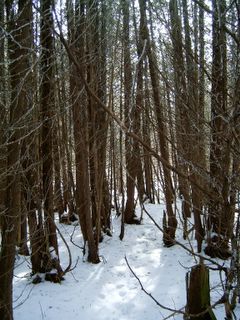 The cedar bush is not terribly old. Human spoor, such as shown in the picture below, show that it has been used as a dump in the past. Near the tractor seat there is also an old wagon wheel with a fairly substantial tree growing through the spokes. 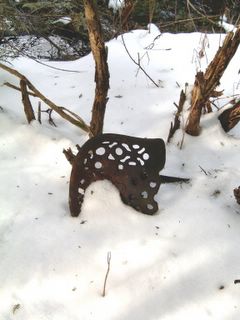 Next time, the far field and the fox den!

Posted by Pamela Martin at 11:56 AM No comments:

I finally got out on my walk again yesterday. Lots of deer sign everywhere--the deer are emerging from the woods. I also heard the pileated woodpecker calling for the first time since last season, and the cardinal singing again. There are tracks everywhere and a few scraps of rabbit--possibly the one I reported on earlier. While I welcome spring, I hate to think that the good tracking, so brief this year, might be over. Please, more snow!

The picture below shows an area on the walk we call the scrape. Topsoil is regularly harvested from this field. One year it is piled, as you see in the picture, then the next year the piles are sifted and removed. This creates barren patches, but also good areas for tracks in dust and mud. I'll post other pictures showing the various landscapes of the walk in future entries. 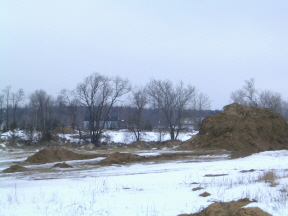 The Snow is Vanishing
Posted by Pamela Martin at 9:11 AM No comments:

I haven't been out on my walk for days now, but the wild wildlife times continue. Sunday I had to drive to a meeting in a small town northeast of Thomasburg (Tamworth), and on the way saw a kingfisher dive into a pond after a fish, through a fairly small opening in the ice. So far north for this bird--at least that's what I've always thought. Then after the meeting, one of the other participants had a bird (dead) that he hoped I could identify. It was a female pine grosbeak--just a little bit too far south for this bird, at least that's what I've always thought.

But the best came on the drive home. I was one the backroad that turns into Clare St. here in the hamlet, just at dusk, when I saw a large shaggy shape in a tree right at the side of the road. An owl? I stopped for a better look, and it was indeed an owl, a Great Gray Owl. These birds are everywhere in southern Ontario this year. It's being called the largest incursion ever recorded. But I'd started to wonder if I'd ever see one. What a magnificent bird!

The next day my luck held. I saw a bald eagle and a black-backed woodpecker. The latter was a first for me. Now if I could just see a snowy owl.....

Tomorrow I'll get back on the walk and see what's been going on around here lately--if I can sort out the multitude of tracks.

Posted by Pamela Martin at 5:48 PM No comments: