Circus of the Spineless

One post that jumped out at me was the from The Dax Files of Georgia, USA, I believe: Woolly Worm Winter, a post about a woolly bear caterpillar with no orange at all ... just after I published Woolly Bear Predicts ... What could it mean? Hard winter in Georgia, balmy eastern Ontario?
Posted by Pamela Martin at 2:36 PM No comments:

At the turn of every season, an Environment Canada spokesperson offers up a long-range forecast. Winter this year, for the most part, warmer than normal and dry. Cynics suggest, and sometimes I am one, that the pronouncement signifies its opposite, so expect a long, cold, wet winter. Fortunately there are other ways to find out what's coming.

The caterpillar of the Isabella Tiger Moth (Pyrrharctia isabella) steps up. The proportion of orange to black predicts the coming winter, it's said. Is it reliable? Well, sure. At least as reliable as the human professionals. There are a number of other indicators in the natural world to consult. High cones on the evergreens, lots of snow, for example. The spruces around here have produced substantial cone crops, all very high. So, spruce trees say the weather professionals have the precipitation wrong (oh, I hope the trees are right--last winter was much too dry), while the caterpillars are saying they have the temperature right. White cedar cones, also plentiful, are right to the bottom of the trees, as are the juniper berries. Insignificant? Or disputing the spruce trees' prediction? 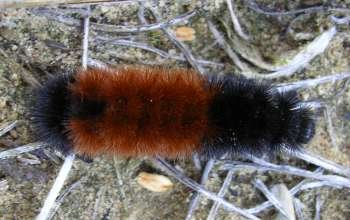 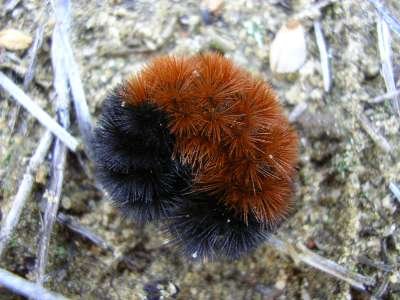 When you pick one of these up it curls into a tight ball.
Posted by Pamela Martin at 10:31 AM 2 comments: 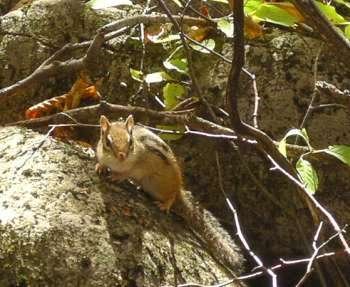 All aboard the Friday Ark!
Posted by Pamela Martin at 9:12 AM 3 comments:

It's here, the 35th edition of I and the Bird, the carnival of bird and birder blogging. Up at, appropriately for the season, Migrations.

Head on over for stories from around the world, of migrants, and of birds at home. Next up at Words and Pictures, Thursday, November 9 (submissions due, Tuesday, November 7). Go to I and the Bird Central for more information.
Posted by Pamela Martin at 8:21 AM No comments:

One day last week, as every week, just about, I was headed down to Prince Edward County for the day to work. On the side of the highway just south of the hamlet I saw a road-killed coyote. I didn't stop, but even a passing glance was enough to see that this had been a good looking animal in good condition. Sad, but interesting too, because although I've only seen a handful of road-killed coyotes in my life, this is the second one I've seen in this spot. And I've heard tell of sightings of successful road crossings by coyotes there too.

The spot is adjacent to the edge between a farmer's fields and a bit of woods on both sides of the highway. A good kind of territory for a coyote run. This, i..e., the southeast corner of my hearing range from the front porch, is also the place from which I most often hear the coyotes singing. After a quiet period, I've been hearing them again, almost every night, sometimes one calling, sometimes a whole gang singing. A whole gang? I'd really like to actually see this sometime, to get some idea of how to determine the number of singers from the song.

I carried on down the road thinking that it's been a while since I last saw a coyote, and a traffic victim was no substitute for a real sighting. Got to The County, got to work.

I work in the same place where I often house sit, a place I've written about here many times, where warblers fallout, where deer give birth, where the raccoons will run right over you if you let them. One of the great features of the property is that the land drops sharply away just behind the house, giving an excellent view, getting better as the trees lose their leaves, of a laneway down to the lake, a bit of hardwood forest, and some fields and woods. 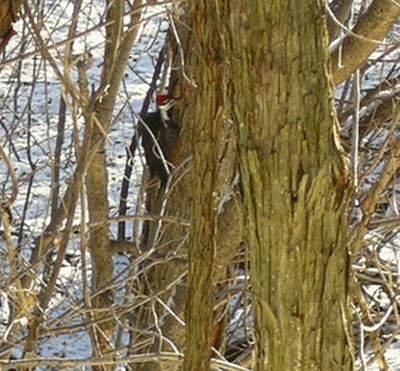 I can't believe I don't have a photo of the lane--but this picture of a pileated at work from last winter, taken from the yard above the woods, gives some sense of the way the land drops
In the middle of the afternoon I was out in the yard, taking a (smoke) break, and looking down the lane. There was a brownish lump too far down to make out. Luckily I had my pocket binoculars. (One of the best things about cooler weather is the extra pockets!) A coyote--alive, and mosying about looking through the grass for a snack--just when I had been wanting to see one, and almost exactly in a spot where I'd seen a coyote twice before. (See, for example, Another County Encounter ) I watched for several minutes as it came up the lane slowly, until it seemed to look in my direction; it may have spotted me, or may have caught my scent, causing it to look. In any case, it quite calmly headed off the lane into the brush and out of sight.
Posted by Pamela Martin at 8:00 PM 3 comments:

It's not entirely clear to me why I haven't been able to write here much lately. Something to do with being overwhelmed with the responsibilities of publishing, or a concern that the stories I have to tell that fall within the purview of the blog are getting repetitive, or some general fatigue caused by too many wars, and a government that is taking us down a bad, bad road much faster than I thought they would or even could when they were elected last January. (It's been a real civics lesson for me, learning just how much power a minority government can wield!)

But today I remembered what I value about having done this now for almost two years. The record I've been building up: casual and hit-and-miss as it is, it is the beginning of a record of the rhythm of the year. I remembered because I was curious about what was around last October, and realized I could check the blog.

Last October was rainy too, but warmer, following a much warmer September. The juncos were here by this time last year, but last year I'd already seen a Tree Sparrow by now, a winter feeder bird. I haven't seen one yet this year. The last day of October 2005 was warm and sunny, and covered with ladybugs, and a few wasps. It could happen again this year, but it's been ages since I've seen a wasp, or a ladybug.

A few days ago a mess of Golden-crowned Kinglets accompanied by sparrows I never got a good look at visited the front yard. Juncos have been visiting in small flocks, then this morning I looked out the back window and saw a mixed flock of song and white-throated sparrows. Walking, more sparrows in the fields, mostly song, then in the cedar bush, a very noisy flock of chickadees. I walked over to see who might be with them.

Something I've noticed this year more than I have before is how often travelling warblers and kinglets are to be found hanging out with chickadees. And one of the great thing about chickadees, contrary to the title of this post, is that you don't have to chase them at all. Sure, I wandered towards them today, but if I'd just waited they would probably have come to me. I could hear that they'd already noticed that I was nearby. And the Golden-crowned Kinglets with them today would have come along too.

So wait for them, or go over to them, but pay attention to the chickadees this time of the year for themselves, and for the hangers-on.

Most of the leaves are down. We've had a few frosts, enough that all tender plants have frozen; hardier ones are vibrant green from weeks of rain. 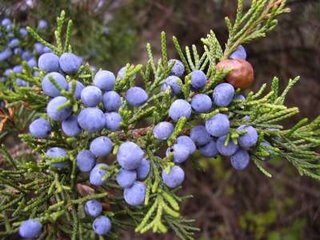 Like so many others this year, some of the red cedars have fruited spectacularly.
In the upper right you can see a small gall that will "blossom" one day next spring.
Birds in the yard this morning:
Downy Woodpecker
Hairy Woodpecker
American Goldfinch (solitary specimen, looking lost)
Black-capped Chickadee
Dark-eyed Junco
American Crow
American Robin
European Starling
Song Sparrow
White-throated Sparrow
Blue Jay

Birds on the walk this afternoon:
Mourning Dove (so many!! spread out all over the place, apparently in pairs)
sparrows, spp.
Song Sparrow
Blue Jay
Golden-crowned Kinglet
Black-capped Chickadee
Posted by Pamela Martin at 4:58 PM 5 comments:

Lost in a folder marked "Sept18-flora," these images of northern walking sticks (Diapheromera femorata) I came upon cavorting in a raspberry patch. I was following a butterfly at the time, when the sight of three walking sticks in the canes stopped me. As I approached, gingerly, one of them dropped away, leaving two, busily engaged. I couldn't see for sure what was going on, but I photographed it as best I could, avoiding thorns and not wanting to disturb them if I could avoid it. As it happened, they didn't pay any attention to me.

Back in August there was a walking stick hanging around on the patio. 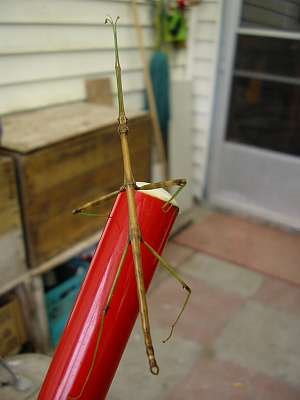 Posing on the handle of a butterfly net
I did a little research, and oddly enough a lot of pet sites popped up. Also the comforting information that there is only one walking stick, the northern, likely to be found in my neighbourhood (so unlike the case of the bees and wasps!). In French they are known as bâtonnet ordinaire.

All aboard the Friday Ark!
Posted by Pamela Martin at 10:54 AM 5 comments:

I and the Bird #34: Hootenanny Edition

Head on over to the Tortoise Trail for the Hootenanny edition of I and the Bird, the blog carnival of birds and birding!

If you blog about birds and birding, consider taking part in the festivities next time, hosted by Dan Rhoads of Migrations. Send submissions to Dan (daniel-dot-rhoads AT gmail-dot-com) or Mike (mike AT 10000birds-dot-com) by Tuesday the 24th of October. 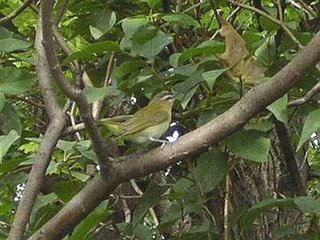 A Red-eyed Vireo passing through early in September
Posted by Pamela Martin at 10:19 AM No comments: