Signs of the Apocalypse

Last night, around 10:00 p.m., I was out on the porch having a smoke, when a coyote, a large coyote, going at a smooth trot, went by the house on Clare St., past the driveway then up across the property towards the fields. I was stunned. I don't know why, I know there are a lot of coyotes around here. I see sign of them regularly, and hear them singing too. But something about it going by, on the road at night, without a glance to the right or left, reminded me of too many post-apocalyptic movies I've seen.

So, after I recovered I put my boots on to look at the track to see if this was actually a funny looking dog. Verdict: probably not. I stood around in the yard for a while--thinking and watching--then I saw another one, going by on the other side of the road--taking the other choice offered by the Y intersection the house sits at the bottom of.

Another one!!?? The same one come around in a circle? Well probably not, this one looked smaller and darker. But really, two? Or just dogs and a fevered imagination? A moment later I heard a chorus of coyotes singing just to the east of the hamlet (the usual direction). I guess there was a coyote convention in the neighbourhood last night. I'll be getting out this morning to see what I can see.

Posted by Pamela Martin at 7:59 AM No comments:

Yesterday the rabbit corpse was still there where I found it, no sign that anyone new had been by. I worried that my tracks coming and going would bring a domestic dog to the scene.

Today there is a myriad of strange tracks out there--no pictures, pictures wouldn't help. Clearly there was a person or two out and about--perhaps with a couple of wild and crazy dogs. Their tracks and other unidentified were all around the little spruce where the rabbit was stashed. The body is gone--but I could come to no firm conclusions about what took it.

There are many problems with tracking humans travelling on foot. They might do anything, as might their dogs, making it harder to get a set of working assumptions. Humans also confound an assumption I use to distinguish domestic from wild dogs. I assume that it is very unlikely that a small dog would be out there in the field on its own--so unless there is very good reason to suppose otherwise (scat, track patterns, etc.), I assume that small feet are wild feet. But these humans may have had a large (perhaps very large) and a small dog with them. I just don't know.

There are so many tracks out there now, I need the clean slate of a good 5-10 cm of new snow!

Posted by Pamela Martin at 8:05 PM No comments:

Last winter I found evidence of 11 rabbit kills by the foxes just in the little area where I walk. This year nothing until yesterday. I was beginning to worry a little about the foxes, and I didn't want them to come into the yard and take our resident rabbit (last seen just before sunrise this morning!). Then, I found the body pictured below, cached under a little spruce in the plantation in the field. What you can't see in the picture is that this rabbit has no head. I didn't want to disturb it too much and given the light, I couldn't get a picture that shows this, so you'll have to take my word for it.

There was a line of fox tracks going by the spot, and a small disturbance just in front of the carcass, but no signs that the rabbit was killed there, or indeed anywhere else I went yesterday. Headlessness is a feature of rabbit carcasses I observed a couple of times last year. Perhaps the head is the best bit, so consumed first. Seems odd though--all that skull to get through. Maybe it makes the rabbit easier to carry--it is pretty clear that this one, like others I've seen, was carried from elsewhere to rest here.

Conditions are still too cold for clear tracks, but I make a couple of what I hope are reasonable assumptions that lead me to the conclusion that this is a fox kill, not coyote or fisher or any of the rest that enjoy rabbit. Not fisher because I haven't seen any fisher tracks out there this year. Not coyote because there's a body. Coyotes in winter tend to eat rabbits where they find them. Then all I find is the tracks and a little blood and fur in the snow. (Not bird of prey for the same reason--I wouldn't expect any of them to leave a body in a location such as this one.) Foxes cache rabbits or part thereof, and come back for them later. Often, they bury them in snow. This cache is a little casual--I found it easily. (Though another winter I did find half a rabbit cached in an old boot track in the snow of mine. So different from the time I found the tracks of a coyote apparently reluctant to even cross an old set of my tracks.) Foxes are also daintier eaters than coyotes. When they do eat a rabbit fresh, they leave the stomach and intestines strewn about.

Last night was colder than forecast (-28 C), and the cold persists, but if it warms up a little later on, I'll go out and check on the body. 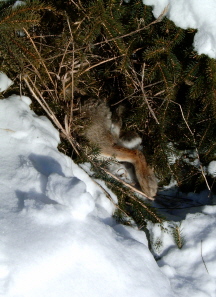 Posted by Pamela Martin at 9:15 AM No comments:

A Long and Winding Road

After a couple of days absence I managed to get out yesterday to see what I could see. The temperature rose to a balmy -10C, in spite of the forecasts, and the sun was shining. There was lots to see (see "Murder Mystery" above), lots of tracks nearly obliterated from the previous couple of days, and lots fresh. I was particularly struck by the mouse trail, pictured in part below, that went on for mouse miles. Tempting fate for sure--visible against the snow to owls, hawks, shrikes, foxes, etc. But all signs suggested that this mouse made it back safely under the snow after its long sojourn. 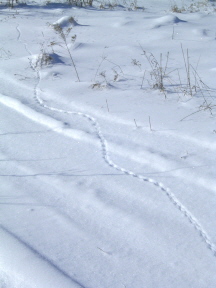 There was also a set of deer tracks, and a lovely confirming pile of scat on the far side of the far field. And a cardinal in the cedar bush singing his territorial song. Spring must be just around the corner!

Posted by Pamela Martin at 9:14 AM No comments:

Never did get out yesterday. And I haven't been out past the shed today. -19 C and still windy--though it is sunny now.

The wind last night beat some of the snow down into a crust--and scoured some right down to the bare ground again. Still too cold for pictures, but if the wind dies down, I may get out yet.

The yard rabbit was out yesterday and this morning. I saw it at around 5:00 p.m. right by the front porch--very unusual time for it to be here. Then this morning there were fresh tracks on the usual route from bird feeder to
bird feeder.

Posted by Pamela Martin at 11:43 AM No comments:

I did get out yesterday, around noon, after the breeze died down, but it was too cold to take the camera. The canid pair had been out again; I am now pretty sure that these are red foxes, although the quality of the tracks continues to be very poor, and will be until the temperature warms up.

But the best things I heard and saw yesterday were in the yard. First, a northern shrike came swooping in to a shrub near the bird feeders, to the consternation of the chickadees, et al. The bird stayed in the shrub long enough for me to get a good look, then swooped off again. Then last night there were two great horned owls calling in the trees across the street.

It's a little warmer today than it was last night, but the winds have picked up again, so I may not get out at all. And more snow is expected!

Posted by Pamela Martin at 9:29 AM No comments: 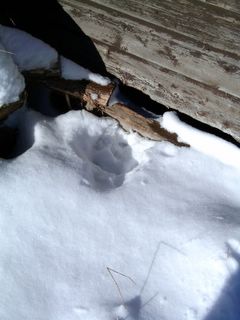 In fact, there was no rabbit sign out in the field at all. But our yard rabbit was as active as ever--and returned again to its refuge under the shed. Good strategy to avoid the canids patrolling beyond the property line!
Posted by Pamela Martin at 12:27 PM No comments:

A Pair of Canids 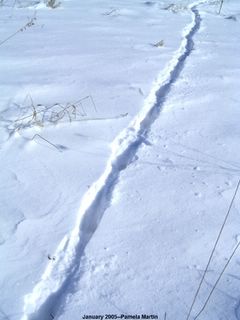 The weather turned cold again over night after The snow ended--too powdery to take a good track, but I'm pretty sure that what I have here is a pair of foxes or coyotes. They were all over the field last night, and may have taken a mouse or two, but no sign that they got a rabbit.
Posted by Pamela Martin at 12:25 PM No comments:

After a week of hard cold bare earth and very cold temperatures, it is finally snowing. It started this morning and hasn't let up yet (after 5:00 p.m.), though the accumulation is moderate (5-10 cm). It's enough! This morning all I found out in the fields was the faintest suggestion of a fox track, a hint of rabbit, and another canid--dog? coyote? There was no telling. Tomorrow morning I'll be out tracking again--and whole stories will be written in the snow, provided, of course, the snowfall stops some time tonight. So with any luck, pictures tomorrow. Meantime, from last year: 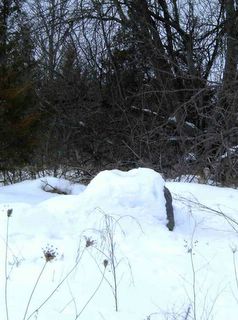 The depression in the snow on the rock was left by a napping fox.
Posted by Pamela Martin at 5:34 PM No comments: 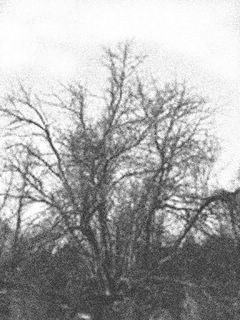 By the fox den
Posted by Pamela Martin at 10:46 AM No comments: