Flip Some Rocks on September 2

Dave of Via Negativa has called for September 2 to be designated International Rock-flipping Day:

a day for everybody to go outside — go as far as you have to — and flip over a rock (or two, or three). We could bring our cameras and take photos, film, sketch, paint, or write descriptions of whatever we find. It could be fun for the whole family!

I've spent so much time this year looking into flowers for spiders, looking at butterflies, looking into foliage for caterpillars and yet I haven't looked under a rock even once. So I'll be there, September 2, looking under some rocks. And apparently there is even a prize being offered:

The grand prize goes to anyone who can get a picture of a non-human critter, such as a bear or a raccoon, flipping a rock on September 2. (I don’t know what the grand prize will be yet, but trust me, it’ll be good.) 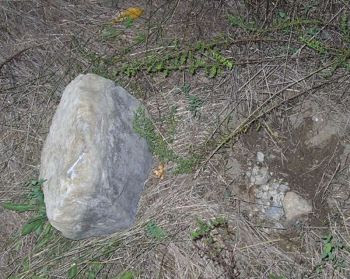 Bear-flipped rock
I found this flipped rock last year, so it won't qualify. Oh yeah, and the bear had already gone when I snapped the picture. But I'll be on the lookout.

My goodness, I just realized Thomasburg is not far from Belleville!
I spent one year as an exchange student in Belleville in 1987/88 and lived on the Moira River in Corbyville, not far from the distillery!!

What a fantastic coincidence!!!
Cheers to that!!

Corbyville was in the patch I counted the first couple of times I went out for the Belleville Christmas Bird Count. But really, when I think Corbyville, I think Wild Turkey. It has been one of the most reliable spots for a sighting since I've been in these parts. But the reintroduction effort was only a few years old back in 1987. Did you see any while you were here?