Yesterday I was going to write quite a different story than the one I have today--but I never got around to it. Yesterday I saw the Brewster's in the old apple tree on the far side of the far field, and it seemed to be with another warbler, but damn these slow birder eyes, I only got a glimpse of the other bird and couldn't take in enough of its field marks (it was a warbler in the yellow-greeny group, I think) to make any claims that it might have been with the Brewster's--i.e., partner, young, whatever. 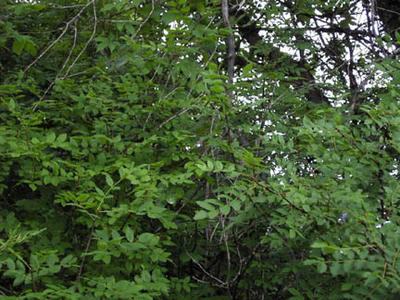 Where the bird was.
Out again early this morning, near the cedar bush where I have been on the lookout for the common yellowthroat that I am pretty sure is nesting near the willow shrubs on the east side of the cedars, there was a warbler "chuck" cacophony. The mosquitoes weren't too bad (cool morning, the first in ages!) so I was able to take up a position and spend some time watching the warblers flit in and out of the foliage. The common yellowthroat was there, and gradually I saw three others as well, including a Brewster's! Same one as the one I've been hearing and seeing on the other side of the far field? The distance between the closest singing perch from earlier in the season and this point is probably not much more than 100 metres, but the habitat changes three (or four) times, making it seem like another world. Because the Brewster's is rare, assume that this was the same bird. Because the Brewster's may well be the offspring of the golden-wing that spent last season here, assume that there are three others for whom this is also home. I may need to find a partner to work the Walk from the other direction for a few mornings to see if we can see Brewster's warblers in two different places at the same time.......

Anyway, the great thing this morning, whoever this bird was, was that it was carrying food, and entering a nest site with noisy nestlings. And one of the other warblers at the scene was a blue-winged, also carrying food, also going into the noisy nest. In one fell swoop, this observation, if accepted, confirms both the Brewster's and the blue-winged warbler as breeders in my breeding atlas square (18UQ11)!! In fact this is the first record of a blue-winged for the square.

The Brewster's warbler is the common form that a hybrid produced by a mating of golden-winged and blue-winged takes. In a way it is more a phenomenon than a bird--and a rather worrying one. The fact of the hybridization and other changes affecting the golden-winged warbler is thought to be putting the species at risk. Cornell Ornithology is running a study right now to monitor golden-winged populations. From their site:

I was very excited when I first found the Brewster's warbler back in May, and a little apprehensive because I knew this meant I would have to fill out a rare bird report for the breeding atlas. I did the report right away, then as the weeks passed and I saw the bird with great regularity I knew that there had been no mistake about it. And I was hoping that I would get to see it with a mate. I was curious as to what species it would end up with--blue-winged or golden-winged, or another Brewster's. But I am also concerned that the presence of this bird in the field where there was a golden-winged last year is an ominous sign. I just got to know the golden-winged last year, and am fond of it in part because it has a song that I was able to learn fairly easily (certainly much easier than sorting out chestnut-sided from redstarts from magnolia warblers). Now, with the Brewster's mating with a blue-winged, the golden-winged has been edged out here.

In his very interesting book, Out of Eden, Alan Burdick writes about the ambivalence with which some scientists investigating invasive species view their subjects. On the one hand many invaders are very destructive of the ecosystems they invade (the book opens with the brown tree snake, the havoc it has wreaked in Guam and the work being done to prevent it from getting a "foothold" in Hawaii), on the other hand the invasion itself is quite interesting, and there is something attractive about the resourcefulness and tenacity of the winners of the Darwinian struggle.

The blue-winged warbler is not an exotic like the species Burdick discusses, but it is a species whose range is probably expanding because of changes we have made to the habitat in North America over the last hundred years.

The history of life on earth has always been a history of both incremental and sudden, drastic change. Right now we are seeing the ranges of many bird species shifting because of changes in barriers to movement, changes in habitat, changes in weather. A great number of species are shifting north, such as the orchard oriole I recorded in the square. Others are losing habitat because of the reduction in the amount of land used for agriculture over the last hundred years, just as many lost habitat when the forests were cleared in the previous century. The history of the golden-winged warbler, probably largely unknown, would be very interesting to see correlated with logging and the clearing of land for agriculture. The kind of shrubby habitat it prefers, that exists at the edge of the cedar bush and the far field, is there because the forests were cut, the land was farmed and now it is reverting to forest again, both because of the effort of human beings (some years ago a lot of the land in this area that is no longer being farmed was planted with evergreens--this practice is falling out of favour now because it destroys the habitat of the grassland birds) and the natural succession of plant growth--as trees get going, they eventually shade out the shrubbery. Any change of this kind, from grassland to shrub to forest, benefits some species to the detriment of others. Burdick layers his accounts of invasive species in various parts of the world and various habitats with more philosophical musings about what is natural, what our role in ecological change is, and how we perceive the difference.

Personally, in this case, I regret the possibility that the golden-winged warbler, my new friend, is fading away into the blue-winged warbler population, but simultaneously welcome the opportunity to witness the event.
Posted by Pamela Martin at 10:44 AM

As I read this point, and got to the point where you said the warbler was carrying food, I immediately thought to myself "Confirmed, feeding young" -- an automatic response for someone involved in a breeding bird atlas like myself. I loved reading down just a bit further to see you are as well! I just started reading your blog; well done.