For the first time in ages I got out at a decent hour this morning and in spite of the less than optimal conditions saw lots of birds. It's a beautiful morning, but too strong a breeze tossed the sound around, rustled the leaves, caused leaves to fall, all making it difficult to locate birds.

A slow start, but interesting: a pair of ravens over the cedar bush, then flew off to the east. Ravens nest in the conservation area just a few kilometres away every year, but are relatively rare visitors to the hamlet. Crows on the other hand are always in the hamlet, and are generally pretty vigilant about defending against ravens. But lately, maybe because breeding is over, I've seen ravens a number of times.

Robins were everywhere in the fields this morning--a large flock of maybe thirty was dispersed over the area, feeding, fighting, and otherwise carrying on. Yesterday I read a post over at A D.C. Birding Blog about a trip to the National Arboretum that described a flock of robins with a few other thrushes mixed in. I looked as best I could, but no such luck here. I did see a couple of flickers though that were either chasing or being chased by robins.

In the scrape, where the seedy weeds grow, there were a number of sparrows, but no identifications.

A lone catbird was heard but never seen in the far field--and it either followed me, or else there was another on the far side. That was where the flock of chickadees picked up my trail. Not sure how many--very active and very noisy--perhaps 8 or 10. They were flitting in and out of the shrubbery all around me; then I noticed that there were other small birds in there as well. Warblers! The only one I had a good look at was a magnolia warbler, probably a male in fall plumage. I kept going along the western edge of the far field, watching for more. Nothing but the robins, but I did flush a small animal in the grass. This was at the exact spot that I flushed something earlier this week. Once again, I didn't see it, but it dashed through the grass for a couple of metres and then I heard no more in both instances. I walked over in the direction it took but didn't flush it a second time. The first time this happened I assumed that it was a rabbit--things so often are--but now I think that it was probably a groundhog, going to ground.

Carrying on back to the cedar bush, the chickadees following, I came upon a mixed flock of warblers and ruby-crowned kinglets. Or rather, a flock of 5 or 6 kinglets with a couple of warblers tagging along. To my surprise, and delight, they all responded to some "pishing" so I was able to get a very good look. 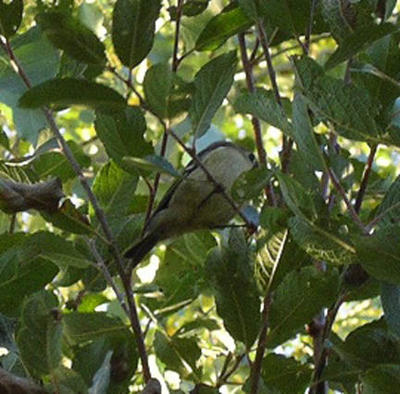 A kinglet--not keen on posing for a portrait.
The golden-crowned kinglet nests here, but the ruby-crowned is a migrant only--so it was very nice to see them. The warblers were another matter--confusing fall warblers indeed. This is when I leave Sibley and go back to Peterson for help. Could they really be Cape May warblers? 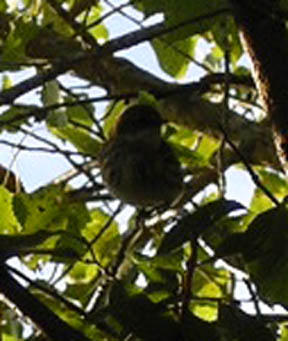 There's a bird there--I swear!
The picture is bad--so I don't think that anyone seeing it will be able to help. The Cape May breeds north of here, overlapping with the breeding range of the ruby-crowned kinglet, so they could have started out together. I've never (knowingly) seen a Cape May before, perhaps still haven't, but that's the closest I could find. 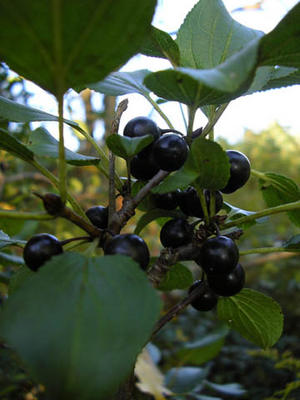 Good crop for such a dry year. Not tasty!
Posted by Pamela Martin at 8:50 AM

hi Pamela, what a wonderful way to spend the day. Your mystery photo strikes me as that of a yellow-rumped warbler, because of the dark hood- they're all beautiful and it certainly can be difficult this time of year to sort out just what bird you're looking at. But I can't think of anything I'd rather do.
Thanks for the note at my blog :)

I have improved my warbler watching skills over the past couple of years to the point that I now see fall warblers, where before I just saw small, drab, indistinguishable birds. But that's a long way from being able to identify species. I do usually know the yellow-rumped, and as luck would have it, saw some in a lakeside park (Lake Ontario) in Kingston yesterday. Which should mean that I know of Friday's birds whether or not they were those. Sadly, I'm just not sure. The field marks I did take in don't, on reflection, distinguish between the yellow-rumped and the Cape May. But then a little research suggested that Cape May warblers would probably not have been feeding as low as the birds I saw were--so maybe they were yellow-rumped.

The field mark that stands out in my mind was yellow patches on the sides of the breast--not a definitive sign. But more suggestive of the yellow-rumped. The real problem is that I know just enough now to see these little birds, and realize that I don't know them well enough yet. Ah, well...another year and I'll be just that much further along.