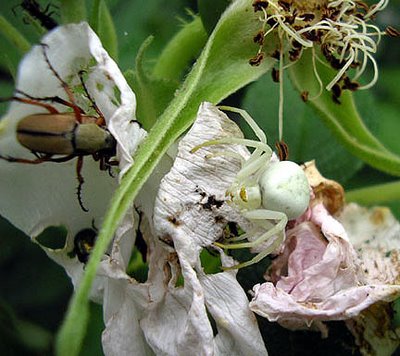 There's always something happening in the rose bush.
The Rosa rugosa alba has it all this week--beetles, bees, ants, spiders, and more stuff I can't even see. What is most striking are the very beautiful goldenrod spiders Misumena vatia, a kind of crab spider. 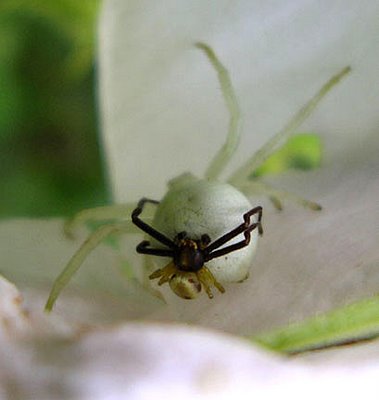 Holding on is a male spider--not in position for mating, is my guess. The female is not a large spider; the male is tiny. I could only really see the dark legs a thorax without assistance. I don't know if they're done mating, or if he's just guarding her. The picture at the top of the post is of this same female, taken later in the day, after the male had left, or whatever. Maybe being so small gives him a better chance of avoiding being eaten by her. Below a closer view of the male. 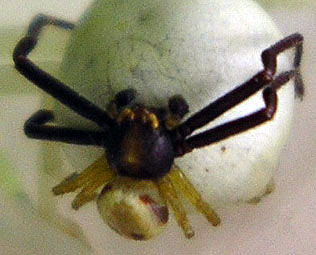 The most aggravating activity is that of the rose chafers (on the left in the first picture), constantly nibbling on the blossoms, sometimes before they have even opened, and constantly mating, guaranteeing more chafers. (Excellent chafer picture here)

A second spider is guarding eggs right now--the eggs are protected wrapped in a silken cocoon with a leaf wrapped around that. According to this website, the spider won't eat while she guards the eggs, and will die after they hatch. But this girl was eating a rose chafer when I first came upon her. I tried to interest her in another later in the day, but she didn't bite. In the picture below, the whitish surface the spider is sitting on is her egg cocoon. 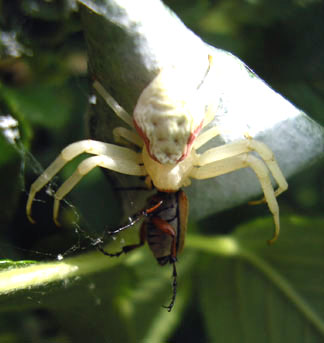 Mother and snack.
Posted by Pamela Martin at 2:06 PM

Wonderful set of photos of spiders, Pamela! Also of the Harvestman in the next post as well. Regarding the female Misumena vatia with the egg case, I've watched them guard the case while they gradually become desiccated and eventually die. They don't seem to go hunting, but I really won't be too surprised if one were to kill an insect that happened by. Also, they seem so fierce when guarding an egg case that they might just kill anything that came to near. Yesterday, I photographed a Xysticus spp. of crab spider that was looked pretty threatening on the LCD screen on my camera!

Thanks, Bev. The female with eggs is already kind of shrivelled--when I first saw her I wondered if this was because she'd just recently been full of the eggs now laid--but after finding out that she will sit there not eating, or at least not hunting, thought maybe she's already been there for a while. I'll try to watch for hatch day, or at least developments.

Pamela - I once photographed a M. vatia with an egg case over a period of about a month. She went from being quite normal looking, to having an abdomen that was very collapsed by the end. She really looked pretty bad by the time she died. As it happened, that coincided with our first very heavy frost. The odd thing about that spider was that there was a grasshopper that used to sit on an adjacent leaf during the warm part of each day. It would retreat into the leaves at night, but kept returning day after day. I found it odd that it would spend so much time close to the spider and that she didn't seem to mind its presence. Also, initially, when I would stop to photograph her each day or so, she would climb on the egg case and hold her legs up in a defensive pose, but she eventually got so that she didn't bother (guess she got used to me). By the end, she just sat atop the case and couldn't do much as she was becoming so feeble. I've noticed that one of the Xysticus crab spiders I'm watching is becoming a little like that too now. Rather sad.

Sad by our lights--but also a rare opportunity to get to know an individual invertebrate, even if it is during her last days. The spider with eggs is still firmly in place, and yesterday, Wednesday, I saw her eating another rose chafer. I guess she is just taking ones that either bother her, or fall right into her mouth

Terrific photos. I love the macro with the male clinging to the female's backside.