Correction
I try to be careful--but sometimes I'm not--and then even if I'm corrected, a misidentification may persist forever in the Google cache.

I've adjusted the text below, and the title, in response to the comment Bev of Burning Silo kindly left on this post, pointing out that this is another spider altogether--probably a Pisaurina mira. The linked page includes a photo of what I think is a female of this species. Mine was probably a male, given the clubbed appearance of the palps.

Back in April, as described in this post, I found a spider on the kitchen floor that was identifed for me as a Dolomedes triton (six-spotted fishing spider). Well, that's crazy. What would a fishing spider be doing in my kitchen? 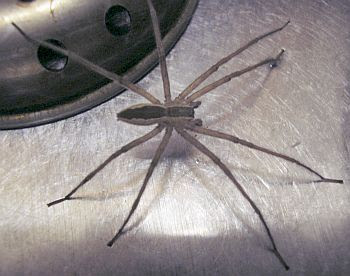 Fishing (?) in the kitchen sink
Then the other morning I found the critter above--same similar markings (though the white strip around the body doesn't show as well in this photo, it was there in life), but bigger, and in a posture I associate with the watery spiders. One difference is in the shape of the marking outlining the body, not the crisp line of the Dolomedes triton, but a more scalloped affair. In the earlier post I mentioned that I thought that this is a familiar spider around the house.....I guess I was right. Familiar yes, in the sense that there are many species in and around the house, and some are vaguely alike. but this one is not Dolomedes triton.

Dolomedes triton is one of the spiders being recorded in Spider WebWatch, so I take this as a sign that I really must sign up and submit the record be more careful when I identify a spider, and not jump to hasty conclusions before 6:00 am (or even later in the day!).

Burning Silo has an excellent post from earlier this year with photos and accounts of a number of quite beautiful spiders in the genus Dolomedes.

And since it's Friday: All aboard the Friday Ark!
Posted by Pamela Martin at 6:51 PM

Hi Pamela - That is a species of fishing spider, but I'm sure it's actually a Pisaurina mira. Although it isn't one of the Spider WebWatch species, there's a page for it on the Nearctic Spider Database and you can leave a comment there with your observation. It's actually very easy to do that. Just click on the "Visitor comments" link. Sometimes you have to click on the balloon thing next to the link a second time as there's a sort of spam catcher thing at work there. Anyhow, once you click see the comment box, just fill in your name and email address (you can choose to make that public or not), and then fill in the comment box with your observation. I've got a few records for that species there and you can read them and click on the links to see various photos I've taken. Here's the link to the Pisaurina mira species page:
http://canadianarachnology.dyndns.org/data/spiders/19773
I hope you will submit a record using the comments feature as I would love to see more eastern Ontario observations on the website! (-:

Thanks, Bev! I checked the link and the page at BugGuide, and I think you're right. I hate to contribute to the misinformation on the web--I've amended the post and will just hope that the original fades away....

Great job on the revisions! What I think is so neat is that you're getting these fishing spiders in your sink! You must have some good habitat near the house. I generally just find Ground Spiders or the odd Wolf Spider in my house. Btw, I agree that that's a male Pisaurina Mira. Although I couldn't see them that well, the pedipalps did look rather conspicuous.