The day started well. I was out in the yard looking for the noisy Blue Jay family I could hear in the elms when I saw some other birds flitting to and fro--turned out to be a couple of Scarlet Tanagers in winter plumage, or young of the year or both. Not entirely unknown in the yard during the migration, but always a pleasure to see them. I moved down the lawn watching them and listening to a Pileated Woodpecker who had started to call. Then the Woodpecker flew by me heading east, followed almost immediately by a rabbit running in the other direction. Meantime a couple of warblers (of the confusing fall variety) turned up in the Maple by the house, and then I remembered: Today is International Rock-flipping Day!

So after breakfast I headed out across the scrape, intending to go into the cedar bush and the sometime swamp in its midst. I haven't been there for a while because of mosquitoes, but the morning was cool and its getting late in the season. Once I got to the scrape, considering rocks all along the way, I saw a small raptor in the top a dead tree and was distracted. It flew off as I moved towards it, so I didn't get a good look, but I suspect it was a Sharp-shinned Hawk, given the few features I could make out, and the time of year and location. But back to the rocks. Near the edge of the cedar bush I saw a rather attractive rock--might be a good first candidate. 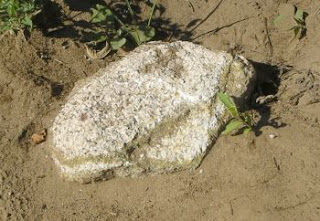 I took this picture of it, as they do on CSI, document the scene before disturbing it. Then, as I bent down to move it, I noticed that it was not alone. 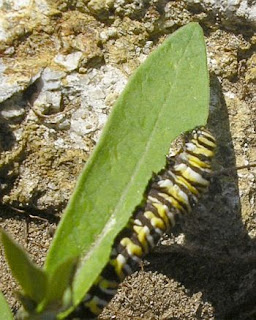 On a very small milkweed plant leaning over the right-hand side of the rock there was quite a substantial Monarch caterpillar munching away. So, another photo, and then I moved on: on to the cedar bush.

We had a very dry June here, a nice rainy July and then an exceedingly dry August. The wetland in the midst of the cedar bush was not merely dry, but incredibly overgrown. Elderberries, Clematis, Joe Pye Weed, Jewelweed, Goldenrod, and lots I couldn't identify were tall and densely massed. The landmarks of winter and spring were gone, and I was lost in a few metres. I had pictured finding some rocks that I know are there, that have water running over them in the spring, and would still have dampness underneath them now, but I couldn't even being to look for them. 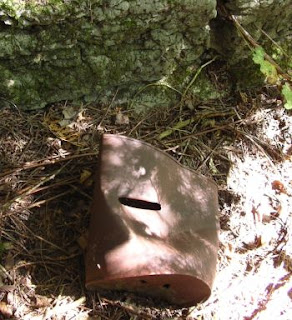 The margins of the spring stream were completely covered up. So I moved into the cedar bush to look for a prospect there. And found this can--in front of a rock, which as you can probably tell was a little too big for flipping without a backhoe. I looked under the can, but found nothing.

Meantime I myself had been found: A couple of chickadees had turned up to give me hell for being back there. I watched them for a while, even pished back, then just as they were getting bored with me a small flock of warblers came on the scene. Some of the "confusing" variety, a pair of American Redstarts, and what I am pretty sure was a Blue-winged Warbler. This last one is always of interest to me, even as a migrant, because of the role it plays as parent to the hybrid Brewster's Warbler, of which I've written often (here, for example, or here). So I spent some very pleasant moments peering up into the cedars, trying to see the warblers before they too moved off. Then I decided to take my quest to the Far Field (that is, the young forest on the western side of my regular walk). 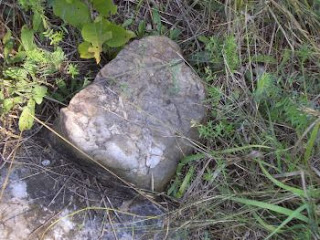 Now this was an interesting rock. It was in the sun and the area around it was relatively dry, but this rock was wet. I could tell that it had been in this spot for sometime when I looked underneath it, but I couldn't help thinking that someone or something had just turned this rock over and left it in place upside down....Who? Why? Underneath it there was a very large cricket that fled immediately and a colony of very shiny, small black ants, including one winged one. Ants are the invertebrates found most often under the rocks around here. I know a little something now about moths and butterflies, I know some of the spider families and a few species, I even know a few true bugs, and other insects, but of ants all I know is that there are many, many species represented around here and I don't know the names of any of them. Under any rock I might see a species I've never seen before, as was the case here, I believe. Still, it was good to finally find a happening rock. 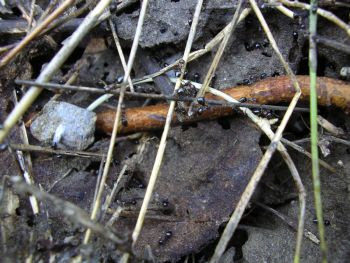 I continued down the Far Field, noticing the beautiful purple asters of fall, and yes, peering into 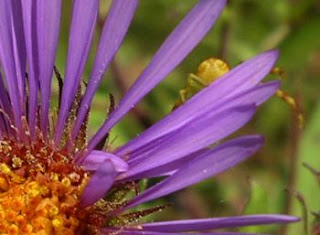 them for flower crab spiders. Of course I found one, not Misumena vatia, but a crab spider nonetheless. You can see it just going over the edge, being camera shy.

At the north end of the Far Field, in a small area that has been bulldozed some, there is a rockpile around the base of a small tree. This is where another year a very vocal groundhog screamed at me without ever showing itself. Nobody took any notice of me today as I peered into the pile and moved a rock or two. I knew that there could be something interesting in there anyway, snake perhaps. But I didn't want to take the pile apart, and then be stuck with trying to figure out how to put it back together 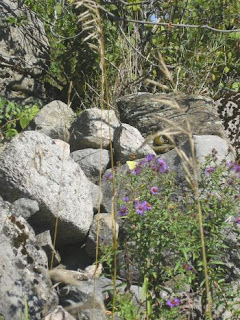 again, so I photographed it and left it, capturing one of the more interesting of the yellow butterflies that were so numerous this morning; there were maybe three quite similar species flitting around, too quickly to get a fix on.

attention to include more of the features of the land. In short, it was a good time. Thanks to Dave for proposing it. And watch here for a list of links to the other participants in the event we call International Rock-flipping day!

That butterfly looks to me like a clouded sulphur, but I am not sure if that is the common yellow in your area.

Sounds to me like you had an excellent nature walk!

Thanks, John. Sulphur definitely! Clouded Sulphur is apparently one of the common ones around here, so is a good candidate. There are a number of other, very similar species though that alos occur here, according to Butterflies of Canada. I'll have to try to get out again today or tomorrow and see if I can match some species to fieldmarks--they're fast flitters though!

Bev, it was a great time. I was mildly disoriented from trying to focus on likely rocks, which oddly enough enriched the outing.

Really appreciate the knowledge that you have shared through this article. Tibet Tour

Thank you very much for sharing the knowledge and information through this article.
Trekking in Nepal
Peak Climbing in Nepal