The great gray owls are still around in southern Ontario, although reports indicate that their numbers are dropping off in some areas. Pretty soon they'll have gone home to the north to breed. But too many won't be making it back. These owls are both large and naive about cars, and are being killed on the roads everywhere.

My friends the Newmans called us the other day to let us know that their son had brought a road-killed great gray over for them to take a look at. Sad, but it is an opportunity to get a good look. 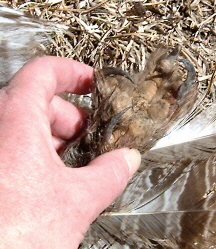 That's my hand in the photo, a medium-small woman's hand, for comparison. That's some foot the owl has! 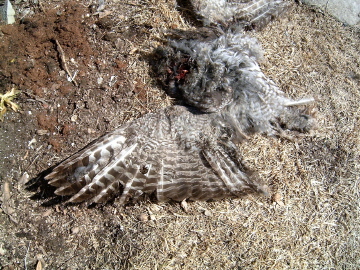 But overall the owl loses its majesty in death. This particular owl was pretty smashed up on the road.
Posted by Pamela Martin at 9:18 AM