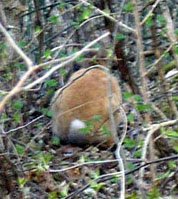 The first time I saw the caramel bunny was the morning after the night I photographed a raccoon in the maple. So I checked the date of that photo: March 22, putting the first bunny sighting at March 23. April 20, a month later, was the first time I saw the bunny in the fields (memorialized in Bunny Gone Wild). Then last night I ran into it again in the far field. So the caramel bunny has now been living rough for at least a month and a half.

I was able to spend some time with it yesterday--confirmed some of my observations. It really does have short legs for its size, although this impression is enhanced by the very thick fur on its legs. It looks pretty good, possibly has a scratch on its nose, but otherwise not beat-up looking. When I first saw it I was, as always, startled by the colour--then I realized who it was and slowly, casually walked up until it started to get restless, when I was within about 20 feet. So I sat down on the path and watched for a while, which was tolerated for a few minutes, then that was uncomfortable for the bunny and it moved off slowly. I wandered after for a bit. It never let me get any closer than 20 feet, but never panicked either.

So it doesn't associate human beings with comfort or companionship. Food is plentiful out there, so a food association wouldn't carry a lot of weight. But it must be classing human beings as non-predators. If it was responding to foxes and coyotes (and perhaps there are fishers around too) the way it responds to me it would be long gone.

I recently read that killdeer, who nest on bare ground, distinguish between predators and creatures who might accidentally step on their nests. The predators get the circling, calling, and then broken-wing treatment to distract from the nest. But they just take a direct run at the others (cattle, deer, etc.) to back them away from the nest site. Quite rightly human beings get the predator treatment. But it's interesting that they make the right call when we're quite different from the other mammalian predators--tall, two-legged, awkward and slow.

I listened to a black bear expert on radio a year or so ago who said that when asked what people should do if confronted by a bear he responds by asking, "How close do you want to get?" He pointed out that the reason that black bears are so likely to run from human confrontation is that they evolved in a context where there were many predators much larger than they are--it's just in the last 12,000 years or so that they are among the largest on the continent, and they haven't got used to the idea yet. I also think that one of the benefits to human beings standing upright is that it makes us appear much larger than we are--something that would have been helpful in our own ancestral environment, which at times at least, if not all the time, would have been filled with predators much larger than we are.

I think it has been ever since I saw the fuss among the feeder birds that an appearance by a northern shrike created one winter day I've been very interested in this question of threat recognition. I was on the porch and saw a bird fly into the snowball bush in front of the house. My initial impression was of a blue jay--but when I got a better look I saw that it was a shrike. Meantime the small birds at the nearby feeder had reacted immediately to the threat. How could they tell so easily, so quickly, that this passerine was not like the others, not like the blue jay, who admittedly they don't like much, but doesn't freak them out. There seem to be shrikes in all or almost all parts of the world (the things you learn from the international bird blogger community), and maybe this is the answer to that question. That is, all of these birds evolved together, survival for the small birds required gaining the capacity to put the shrike into the raptor category. Just as survival for the forbears of the caramel bunny, in the artificial process of selection for domestication, may have required a capacity to respond to human presence calmly.

Submitted to the Friday Ark -- go on over to see who's on board.
Posted by Pamela Martin at 9:04 AM

interesting post- we have neighbors who have let their domesticated rabbits loose when they tired of caring for them. Since they were white and stuck out like a sore thumb, they didn't live long.
And deer do not care for domestic cats. If a cat enters our property, they snort, stomp and will try to run it off. Most animals don't like the smell of cats, and view them as predators..myself included ;)

I like rabbits and I like cats :) Bears and dogs on the other hand.. um, don't trust them. Perhaps its my bizarre alpha male personality ha ha ha!

Seriously, no rabbits around us in any of the 250 acres I wander on. Lots of cats though (!!) which may be why. Check out my flickr page for the deer that visited us before work Thursday Morning!