Who's that Eating the Mugo Pine?

They came from Europe to eat the, also European, mugo pine--the European pine sawfly (see this page as well for pine sawfly info). These guys have been showing up on this pine for a few years now--in ever increasing numbers. 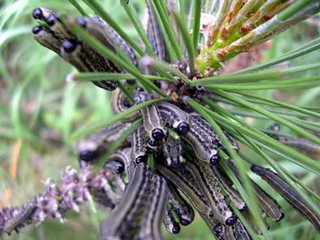 I just learned what they are today, a well-known, fairly common, imported pest (I assume an accidental import). They not only attack this pine, but a number of native species as well. 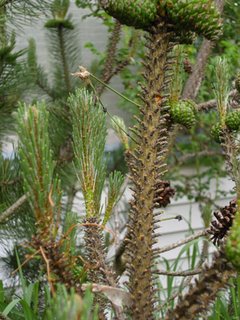 After they're done.
An interesting little larvae--hard to see at first on the needles of the pine--but they rear up if threatened, sometimes in unison, creating a rather pleasant ripple effect over the tree. 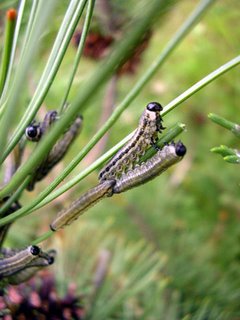 Apparently, and this accords with my observations of them, there is just one generation of this sawfly in a season, so whatever havoc they wreak now will be the end of it until next year.

They can be removed, vanquished, with soapy water, and there are so many this year that I may take some out.

I have mixed feelings about destroying larvae, caterpillars, etc. They are another way nature turns plants into meat, in this case for birds to feed to their nestlings, so I usually leave them be unless they're going to actually defoliate a tree or shrub entirely, or harm one that is already weakened. These particular critters don't seem to be attracting much attention from birds anyway. 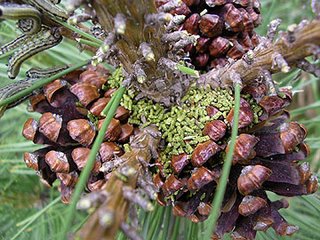 Poo!
Today's the day that Circus of the Spineless is published--this month's edition is hosted by Bev at Burning Silo--a compendium of invertebrate mystery, tales, and beautiful images. Be sure to drop over and sample the best of recent invertebrate posts from around the blogosphere (and around the world).

Interesting to think of catepillars as nature's way of turning plants into meat. Hadn't ever occured to me that way!

I appreciate your sensitivity and respect for the entire system. Great photos too.

Amazing photos, and very interesting. We have birds nesting in our eaves at my work, and it's amazing the variety and amount of food the chicks consume.

Well, It is an interesting information about mugo pine and this European food,It is a good new form to feed the people.

They come every spring onto my favorite dwarf pine(I grafted it myself from the Arnold Arboretum with their help) the little pine is over thirty years old and about three feet tall. When I first saw the caterpillars I was disgusted. But the following years I screwed my yucks to the post and now I relentlessly squish them with bare fingers. Out they go as I say sorry. Bit I treasure my little dwarf a whole lot more!