Not everybody is as fond of the porch spiders as I am--and even I have never watched them as closely as I have this year. So when a couple of them started causing trouble (spattering the seat of a chair on the porch with droppings), I moved them to the maple tree by the house.

I transported them separately, but put them close together on the tree because this couple of spiders is a couple. During the past week or so a number of male spiders have turned up on the porch, and most of them have paired up with one of the original residents. Where the male goldenrod spiders are tiny compared to the females (see Rugosa Drama), these guys are big--as big as the females, or bigger, with longer legs.

I take these newcomers to be male because of their palps.

In male spiders the palps have a swollen bulb like attatchment which is used to place sperm in the female's genital opening. (Nick's Spiders) 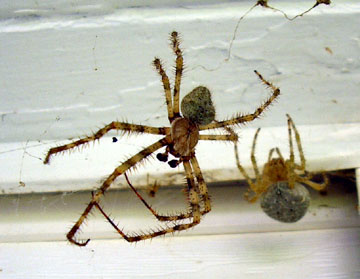 That's him on the left
I haven't observed any of these spiders mating, but I can't see most of them very well, and there is now quite a number of shed exoskeletons caught in the webbing where the spiders rest during the day, making it difficult to sort out the individuals sometimes. Spiders shed their exoskeletons whole leaving behind something that looks just like a sucked dry spider.

So what happened to the two I moved to the tree? I moved the female first. She was completely still during transport, and then was difficult to dislodge from the little net (of the sort used in aquariums) I was using. I finally got her settled on a branch where she stayed, huddled down, stock still. I went back for the male, got him out of the net easily and onto the branch beside her. He ran around like a mad thing, even ran right over her, stringing silk along the branches as he went. Finally he settled down a few feet away. I checked back a few times. He stayed put, she'd moved each time and then vanished. Next morning he was gone too.

Submitted to Friday Ark
Posted by Pamela Martin at 7:37 AM

I moved a big cream spider, some years ago, that had built her web in my bedroom. Took her out to the porch of my cabin in the woods, prime hunting grounds, set her free. The next morning she was back in my bedroom (windows completely taken off for the summer). I moved her out again.

And again. And again. Every morning, there she was, all set up by my bedroom window again.

I finally had to give up and share the room with her for the rest of the summer. I would even bring her choice tidbits and she got really fat.

Amazing that something like a spider could navigate a distance like that, and one she hadn't travelled herself, but been "airlifted" over. The more I watch them, the more I like them!

Nice shot of the spiders together. I like to read follow-ups on observations, so it was interesting to hear the latest news on the Porch Spiders. And yes, isn't spider behaviour rather fascinating. I had no idea how complex their behaviour was until I started watching them more carefully about 3 or 4 years ago.