Michael, my friend and source of news about the wildlife of the big city, Toronto, sent me a picture today of a famous Black-crowned Night-Heron (Nycticorax nycticorax), known as Charlie or Oscar. According to the National Post (story here), this bird has been coming back to Toronto for several years, and consorting with, that is, taking handouts from, people recreating at Harbourfront. There was a gentleman sitting on the ledge next to the bird at the time the picture was taken, feeding it bits of meat or fish from a sandwich. 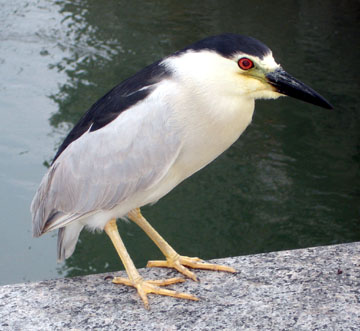 Photograph courtesy of Michael Solomon
When I lived in Toronto I saw Night-Herons regularly, but they're a rare sight for me now. I was very pleased to see a pair when I was staying down in Prince Edward County in May, both perched in trees and flying overhead. It never occurred to me to offer them hotdogs.

As John of A DC Birding Blog says, in his species account, Birds of the Mid-Atlantic #12: Black-crowned Night-heron, they are particular about habitat. While not a common bird in Ontario, the Ontario Breeding Bird Atlas (preliminary data) records this bird as a breeder in several locations in southern Ontario, most in proximity to one of the Great Lakes, as shown on this map.

Submitted to The Friday Ark. Head on over and see who else is on board this week.
Posted by Pamela Martin at 5:42 PM

I am not surprised to read that the BC Night-Heron you describe became so tame. That species does seem to become used to people in crowded areas. The ones at the National Zoo show no fear of passersby.

It's great that Ontario has its BBA maps online. I wish that Maryland/DC had that facility because it would be very useful. Maybe with the next atlas...

I think what surprised me was that people are willing to handfeed such a large, fierce-looking bird. The newspaper story linked quotes people who have been bitten by that powerful beak.

Yes, the Ontario Breeding Bird Atlas has lots of good stuff online. Over the course of the five years of data collection their facility with online technology grew enormously, into the great resource it is now (though much of it is kinda slow loading). I'm sure your region's next atlas will produce online resources we can only dream about now.

I really hope people aren't feeding the birds hotdogs. All that processed stuff can't be good for them.