If you read the post First Count, and you've been following the saga, you may have noticed that there is just one Guinea fowl chick now. But it's gotten quite big, runs very fast, and flies pretty well. At least, well enough to escape to a tree branch if something goes wrong on the ground.

Sunday afternoon something did go wrong. A big black-and-white cat that's been visiting the yard lately apparently made a play for the chick. I heard the hen screaming from inside the house, and when I went out the cat ran off, the hen was nowhere to be seen, and the chick was on a fairly high branch of a Manitoba maple at the edge of the yard. A little later I did see the hen, but she seemed to be heading in the wrong direction for finding the chick. I didn't see a reunion, and didn't see the pair all day Monday, so I worried that the chick was on its own, and still too young to cope. This morning they both showed up--looking none the worse for wear. 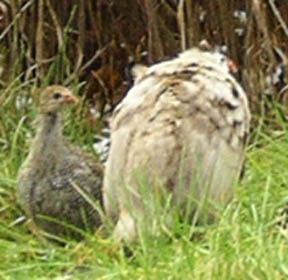 Photo from the weekend, just to give a sense of the current size of the chick.
Because these birds visit the yard so often they are seen by most people who visit the house. As a result we've been hearing lots of Guinea-fowl lore.

It's the walkabout trait that interests me. This is a popular bird among hobby farmers. It also enjoyed some vogue as a defence against deer ticks in areas where Lyme's disease is a problem. So there have been lots around in Ontario and the American northeast. And yet, as far as I can tell, there is no wild (feral) population in my region. The BC coast does seem to be home to feral flocks, and there are rumours of flocks in Nova Scotia, but both have milder climates than we do here.

So I don't believe that my friends will succeed in establishing a wild population here. And I don't think the hen will lead the chick back to her original home for the winter. There's been fierce enough weather already that if that seemed like a good idea to her she'd have already done it. Some breeder information I've seen suggests that to raise these birds the best thing to do is take the chicks to be raised by a bird of another species, since the Guinea fowl is a wanderer. I like the idea that this hen is living the kind of life she prefers, however it turns out.
Posted by Pamela Martin at 8:02 AM

if you have a housecat/feral cat roaming your property, I'm surprised the hen is alive, much less any chicks. Not sure what your laws are up there, but I'd be calling the 'whatever' authorities to have the cat picked up.. that or put a live trap out and trap the little beast yourself. Free-roaming cats, argh!! Cats belong indoors. Period. Sorry to hear about the failed clutch :(

http://www.guineafowl.com
This site will give you all the info you need for raising guinea fowl and if you link to their message board you can post questions that will be quickly answered. If there is only the hen and keet they will probably not survive the winter. They can be trained to return to a coop every night if you have the patience.

Thanks for the link to the guinea fowl site. Very interesting, and a good resource if I do decide to get some of these birds for myself. The hen who was coming around was probably buff (?) according to the colour chart page on the site--but the keets (good word--thanks) looked more like the pearl gray keet. Earlier in the summer I was seeing this hen in the company of a pearl gray guinea--possibly the father.

A better, and friendlier site to visit for great information is guineas.com
I have found this site not as rigid in what you can ask and post. They were great help when I needed information.

Nice story as for me. I'd like to read a bit more concerning that topic. Thank you for giving that info.
The only thing that blog miss is such photo of sexy girl :)
Sexy Lady
Blonde Escorts

Pretty cool site you've got here. Thanx for it. I like such themes and everything connected to them. I would like to read more soon.

Steve says,
my neighbor has two guinea chickens. they are very scared of me!! they run like a cheetah and fly really well!! they are also scared of my dog....... it helps if they can have an out door pen and a coop. the eggs are very tasty, but they are very weird looking....... they enjoy eating bugs and corn as a treat.
~even though this has nothing to do with the story, i thought it might be nice to share with you my experience...........