I started writing this post many days ago--somehow it never went quite right, and every time I saved a draft to return to the next day the story changed.

The original title was "Guinea Fowl Family Update," but I thought better of it. Too neutral. A later title, "And then There Were Two," but I'm not sure anymore. Yesterday we had some pretty amazing weather here, thunderstorms, high winds, near twisters described to the east, and this morning, for the first time in about two weeks, no Guinea fowl came to the yard.

So I settled on "Tough Gig," in reference to the first post about the family, Exotic Chicks, wherein I say, "Tough gig, mothering precocial chicks."

The Guinea hen, chicks in tow, has been visiting the yard every day (until today), sometimes three or four times, to feed under the bird feeders, probably on spilled sunflower seeds. I hadn't seen her for a little while, then she showed up about two weeks ago with five chicks in tow; the next day, four; the day after, three. She held at three for about four days, and then there were two. On October 16 (the occasion of this post) I counted ten. 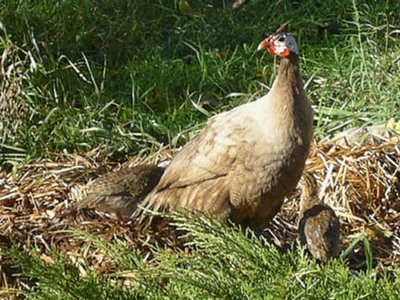 Watchful Mom
I'm getting pretty attached to this mother Guinea fowl. She is very serious, and works hard to keep the chicks together and safe. Every few moments, when they are out from under cover, she turns her head sideways and scans the sky for trouble. Under the tree, she takes a break from eating every few minutes to scan the area. She calls the chicks together when it's time to move, and if one gets separated she will keep on coming back to find it until everyone is together again. I know that she was not meant to raise all the chicks she hatched, but as they get bigger, and I get to know her better, it's sad to see the family reduced.

At the first sign of thunder and lightning yesterday the hen, who had been under the tree as usual, took her chicks into the big lilac where I first met them. The leaves are off the lilac now, so it's not the great cover it used to be. After a few minutes she took them away--I hope to the young pines or spruce up in the first field, which provide very good cover. I haven't seen them since.
Posted by Pamela Martin at 7:48 PM