A Beautiful Morning in Thomasburg

It is a beautiful morning in Thomasburg this morning. Not raining, not too hot, not windy. This is the best morning we've had in many days, a perfect morning for a walk. Early in July the birds are still singing, but now many of them are nesting, and many are caring for fledglings and preparing to nest a second (or in the case of some robins a third) time. Through the fields the predominant birds were the sparrows, mainly Chipping Sparrows, and others I couldn't get a fix on. The Field Sparrows were singing too, and an Indigo Bunting sang a soft song from among the leaves low in a tree, unlike his usual blasting from the top of a dead tree. I know where there is a nesting goldfinch in the first field, but I didn't go over. I found that nest the other day by accident. Interesting, it is still a little early for the goldfinches to be sitting on eggs, but then almost everything is early this year.

Further along, as I entered the far field at the north end (the swamp and cedar bush is at the south end, in mosquito season I leave it until last), I picked up a Vesper Sparrow escort. I couldn't tell where the nest was the--poor bird was carrying food, but wouldn't go to its young while I was near. It wasn't until I was past the old apple tree that it could relax and go about its business. 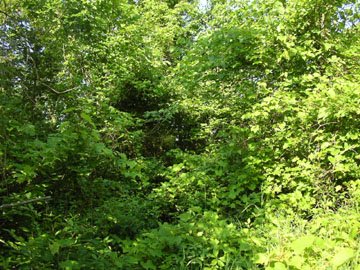 One of the truly great spots for birds
Once the sparrow escort had gone I stopped for a while. I could hear a warbling song, thought probably a Rose-breasted Grosbeak, and soon I could see it. The sun behind me shone on the bird, the colour was fantastic. After a few moments an Eastern Towhee started up. This song as been driving me nuts for years. It's clear, it varies very little, has two parts to it; it's a very easily distinguished song, and yet it has refused to stick in my head. I think I've finally got it, and the bird this morning very kindly sang from high in a dead tree, giving me an excellent view. And then the grosbeak joined it. Fantastic sight!

All the while I could hear warbler song from in the shrubbery. I picked out a Black-and-white Warbler, and I think I heard a Yellow Warbler as well. And something else: chestn

ut-sided? Yes! The singing Chestnut-sided Warbler emerged and spent some time singing from perches on which he was nicely visible, before he continued south on his rounds (that's him in the pictures). A female Rose-breasted Grosbeak came out to take a look at me. A cardinal sang from somewhere back and beyond. A brown thrasher landed briefly in the old apple tree and gave me the evil eye. A catbird called. Chickadees came and went.

Why do I birdwatch? I stood there, in one spot, watching one scruffy bit of edge habitat for about half an hour, totally absorbed in the moment. Everything else falls away, it's just me, and the birds, and the beautiful morning. 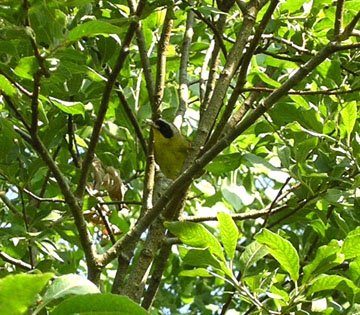 Stopped to visit with the Common Yellowthroat on the way home
Posted by Pamela Martin at 10:29 AM

Very nice Pamela. Felt like I was there, and I wish I had been.

Clare's right - a very nice post and made it seem like we were along for the walk. I enjoyed reading about all of the bird calls. It's a lot like that around here at this time of the year too.

I always enjoy your posts and your curiosity is contagious. Never loose it (I doubt that you will). Blog on Pamela!

Thanks All for the kind words--I'm pleased to no end to think that I can convey something of the pleasure I get from being out there.

Clare, so many of your posts make me feel the same about the Arctic. Such an incredibly different and beautiful landscape. Don't know if I could live there, but I'm determined to see it one day.