This morning a very pretty butterfly spent some time on the screen door, giving me a very good look. My only complaint was that it refused to pose in the full sun (got just the one shot of it partly in the light). 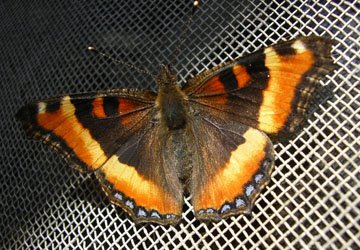 Note the white at the tips of the antennae
Turns out it is a not uncommon butterfly, known as Milbert's tortoiseshell (often written "Tortoise Shell"), Nymphalis milberti. It occurs all across Canada, south of the tundra, and feeding mostly on sap, rotting fruit and dung. Its larvae feed on stinging nettles--which doesn't sound too nice, but according to this page (scroll down, scroll way down, to "Vanessa species Caterpillar") at What's that Bug many caterpillars in the genus Vanessa go for nettles. It seems that nettle-eating is common among the larvae of the family, Nymphalidae, to which both Vanessa and Nymphalis belong. And, of course, some humans eat them too. 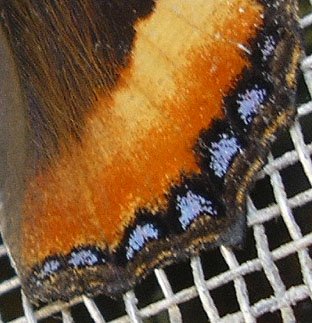 Wing detail
Posted by Pamela Martin at 10:45 AM

Beautiful photo! That one looks quite freshly minted! I saw my first Milbert's Tortoiseshell at the farm yesterday. It will be interesting to see if there are many this year. Usually, I just see a few, but I'm seeing so many Black Swallowtails, Monarchs, Viceroy, etc.. that I wouldn't be surprised if there are more than usual.

Thanks Rurality, Bev. It's easier when the subject volunteers the way this one did.

Bev, maybe it was newly emerged--might explain why it was so willling to sit for the photo. After a little while it flew around the porch like it didn't know what it should be doing, then eventually flew away. I haven't seen one since, but I too have been seeing fantastic numbers of Monarchs, and probably more black swallowtails, but it's harder to say because I am just this year becoming more aware of the various butterflies beyond the Monarch. Interesting year!