I was coming home from a meeting yesterday, just as it was beginning to get dark, along the back roads, through fields and forest. Small flocks of birds flew across the road, making me think of the very impressive Bird Lists at Crows Really are Wise, a list of birds Wise Crow has seen as he commutes to and from work. Even in full daylight I know I couldn't identify all those birds; at dusk, I think I saw juncos once, robins another time yesterday, the rest were mystery birds of the small and medium variety.

But dusk is mammal time.

In one field three deer were grazing, and glanced up as I stopped the car to watch for a moment. They were in winter coats (so soon?), the red is gone, and the thicker fur around their heads give them a cartoonish face, compared to the elegance of their summer pelage.

A dark lump in the middle of the road in the distance turned out to be a very young raccoon, who only reluctantly got off the road to let me pass. It was wet, skinny, and slow-moving; probably an orphan: not a good candidate for surviving the winter.

A long, thin, dark shape coming down a tree.. By the time I'd stopped it was out of sight. Grey Squirrel (black morph)? Looked too big, didn't seem to be moving quite right.

I've never seen a fisher and I'd really like to. I've seen sign occasionally, and I know from the stories around the neighbourhood there are fishers around to be seen--and I've had second-hand reports of fishers trapped by the few trappers operating in the area.

Recently my friends and neighbours Wes and Nancy Newman sent me these pictures taken by their son Bill, north of Thomasburg. 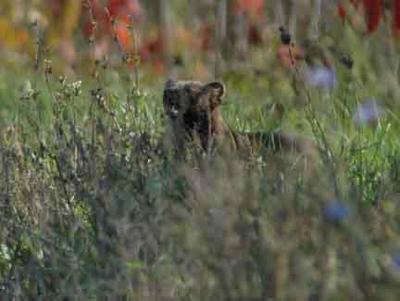 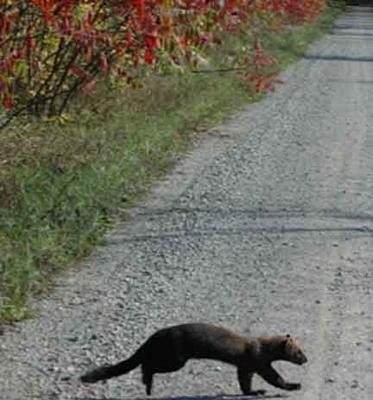 Why did the fisher cross the road? 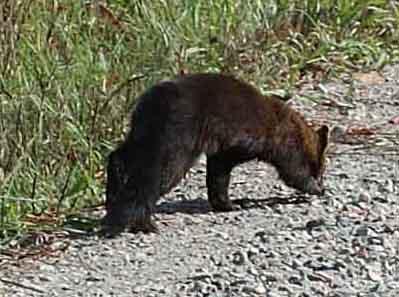 To get to the other side.
I wish I knew that what I saw sliding down the tree and off into the bush yesterday was a fisher, but I never will. Except maybe this way. A strange phenomenon, related to attention perhaps, or a mystery of the universe: once I see a creature once, I see it again and again. So, perhaps mere superstition, but if I see a fisher before the turn of the year, I'll tend to believe that I saw a fisher yesterday too.

Thanks to Bill Newman for the fisher images!!!
Posted by Pamela Martin at 8:53 AM

I've never seen a fisher either. That's what they look like, eh?