Very mixed day yesterday--first sun we've seen here in several days with dark clouds rolling through, periodically dumping a little more rain. We had some frost last week, enough to kill off the tenderest of the garden plants (morning glories and dahlias, in particular), and it's rained ever since. 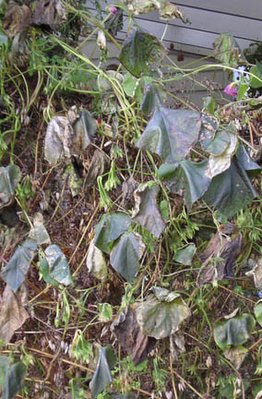 Morning Glories, not so glorious after a touch of frost. 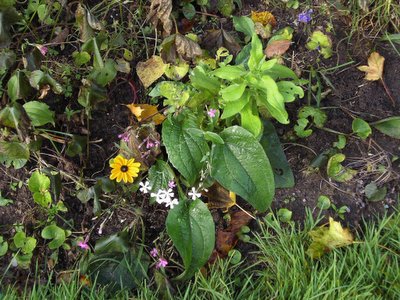 Others survive the night.
Out in the cedar bush I heard a gentle call, and finally located the source. Thrush. I like thrushes because they look so thrush-like. I don't see enough of them often enough that I always know which one I'm seeing, but for thrushes I do have some idea of which fieldmarks will come into play. There are hard cases, but I was pretty sure that this was not one of those, and I thought it was probably one I'd seen before. Turned out it was a hermit thrush (Catharus guttatus) is a nice clearly marked little bird. White belly, good strong clear spots on the breast, dark markings under the chin. The bird I saw was not only calling, it was also dropping its wings and flicking its tail. I don't know what that was all about, but I did happen by Ben Cruachan Blog where I found a link to an Icelandic Birding Diary. As luck would have it, there was an illustrated report of a hermit thrush--the photo there (much better than mine) also shows a bird with dropped wings. The bird was seen in Iceland around the middle of October. I wonder where it was going. 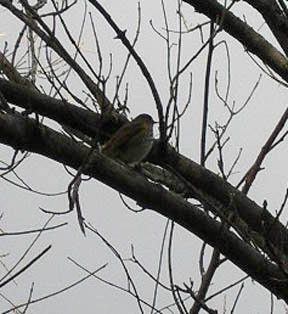 The thrush: you might just make it out.
After I'd been in the bush a while, I circled back to leave close to where I'd come in, and where I'd seen the thrush. 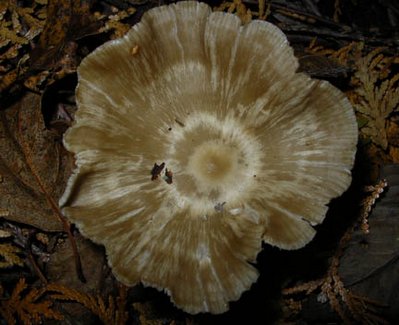 Mushrooms under cedar
I saw it again, and this time there was a robin in the same tree, also calling. A while ago I read about a mixed flock of thrushes (robins, and a veery and Swainson's) at A DC Birding Blog, something I've never seen. What I saw yesterday looked like a robin who'd broken away from its flockmates (I could hear them further out in the field) to gently harass this thrush. I don't speak robin fluently, it seemed gentle to me, but whatever was going on was enough to keep the thrush on its toes, and slowly moving away from the robin.

I reported the hermit thrush to Terry Sprague last night--just missing the deadline for this week's bird report (I must remember: 6:00 p.m. Thursday). But, he wrote, the thrush was interesting enough that he would include it in next week's report. Late migrant perhaps? I'm not sure. I know that it's a breeding bird in the area, at least in the northern reaches of Quinte (i.e., Municipality of Tweed). Even though I had to consult a field guide to identify the thrush, I am pretty sure that this is the same species as the thrush I saw one day (fall or spring--I can't remember) sitting on a big rock in the backyard. Atlassing has taught me to keep notes, but has also inclined me to focus on recording breeding evidence. My notes of other kinds of observations are sketchy at best. There is nothing about the earlier thrush in my notebook, and nothing in the weather journal (where some bird sightings are kept--mostly the spring firsts). Oh well, this one has been recorded now.
Posted by Pamela Martin at 11:11 AM

Interesting story Pamela, captures the essence of birding. Also shows the value of the internet and bird blogging in the sharing of knowledge. Cheers!

I have never seen a mixed flock like that, either. Last Hermit Thrush I saw was last May. He refused to sing!