A Tasty Treat in the Cedar Bush?

Windy today, after foggy, and the thunderstorm, and now sunshine, surrounded by big fluffy clouds, dark in places.

I got out after the world had dried up a little. There was a ruby-crowned kinglet in the snowball bush again this morning, but gone now. The juncos weren't around, and I realized that I've scarcely seen a goldfinch in the last week or so. Goldfinches are year-round birds here, but go scarce periodically. I don't know if the same flock stays here all winter or if flocks are moving around a larger area--different ones dropping by.

The flock of yellow-rumped warblers of last night were not around. But there were some sparrows--little brown birds one might say. They were large and rusty, like the fox sparrow, but not behaving like fox sparrows, who I most often see foraging on the ground. Nor were the streaks on the breast rust--juvenile maybe? 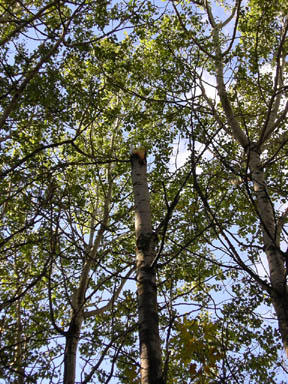 Saw this living tree topped, by the recent winds I guess.
Gave me pause being in there on this windy day!
The other critters on the move at this time of the year are the frogs and toads. The other night I barely missed many, many crossing the highway. Today I saw these guys. 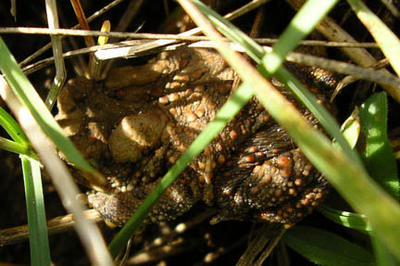 This has to be an American toad--it's the only one we've got around here.
But doesn't that look like more than two warts per spot? 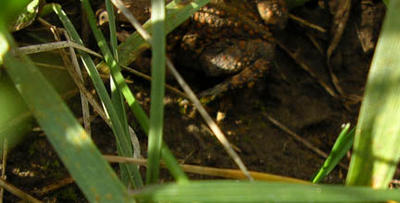 Too close to the edge--but at least you can see an eye. 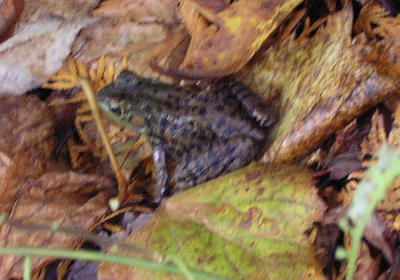 Blurry leopard frog
Also in the cedar bush, a jack-in-the-pulpit (Arisaema triphyllum), almost faded away, but with this very showy clump of fruit. Sweet and tasty too! But left a little stingy, burny itch in a few places in my mouth. I've heard that if it's sweet it's probably safe to eat. I only identified the plant after I came home, so I only sampled one berry. A quick Google search turns up quite a few poisoning advice pages, though the focus seems to be on the leaves, stem, and roots and not so much the ripe fruit. Probably a good thing I didn't make a meal of it though. 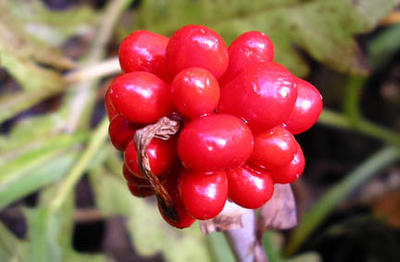 Posted by Pamela Martin at 7:00 PM

Tom Andersen said...
This comment has been removed by a blog administrator.
10:23 PM

Yesterday and today were huge migration days down here, in New York -- it was as if the dam burst once the rain stopped and the winds changed direction; 1,600 yellow-rumped warblers in one spot near Long Island Sound.

Interesting recent posts -- I enjoyed them.

Thanks Tom. It's interesting that the yellow-rumped warbler flocks up the way it does. It also occasionally winters over just about 50 km south of me (in Prince Edward County, which is almost an island in Lake Ontario, and is both warmer and stormier in winter than it is here). Not very warbler like--but in the breeding season, although its common around here, it keeps a very low profile, in the manner of so many of the warblers.